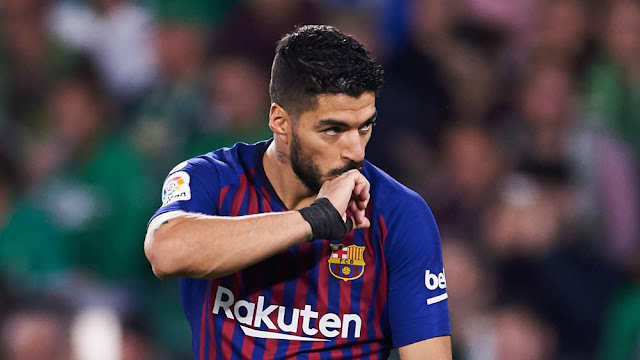 ↑ Grab this Headline Animator
Luis Suarez has been confirmed injured after being stretched off in the 4 – 1 win over Real Betis over the weekend and has subsequently been withdrawn from his country’s latest round of international fixtures as a result of his injury.
Suarez is La Liga’s second highest goal scorer with 18 goals and has 21 goals in all competitions for the Catalan side.
FC Barcelona confirmed the Uruguayan will be out for about 10 to 15 days and are hopeful, he makes it back for their clash against Espanyol. Due to the injury, Suarez will remain in Spain to begin his  recovery.

Delivered by FeedBurnerLuis Suarez was able to get on that score sheet against Real Betis before being taken off the pitch. however, his departure was overwhelmed by his Teammate and five time Balon D’or winner Lionel Messi, who scored a hat-trick in that occasion.

FC Barcelona host Manchester United on the 16th of April at Camp Nou for the first leg of the UEFA Champions League Quarter Final and on La Liga table are 10 points clear of Atletico Madrid at the top of La Liga, with a Copa del Rey final to look forward to against Valencia in May.