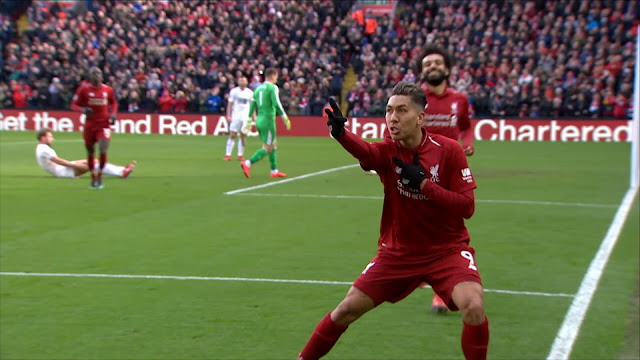 Key Moments Recap :
Goal : 0 – 1 Ashley Westwood
A Burnley corner is curled in from the left and there are two players around Alisson and seemingly blocking him from getting near the ball.
With Alisson unable to jump, the ball sails over him and hits the back post and goes into the net.

Goal : 19′ Roberto Firmino 1 – 1
Salah and Firmino play a neat one-two in the box and Salah then gets to the byline and plays across the six-yard box.
It should be cleared by Tarkowski and Heaton, but they make a mess of it and both miss the ball, giving Firmino an easy tap-in.

Goals :29′ Sadio Mane 2 – 1
Lallana does really well to throw himself at a clearance, blocking it and rebounding the ball into the box. Taylor makes a good tackle to dispossess Salah but the ball falls for Mane and he produces a fine first-time curling finish into the far corner.

Goal : 67′ Roberto Firmino 3 – 1
Heaton’s clearance goes straight to Salah, who races clear and looks to finish on his own, rather than pass across goal for Mane.
Taylor makes a brilliant sliding challenge to dispossess Salah, but the ball falls into the middle for Firmino to finish into the empty net.