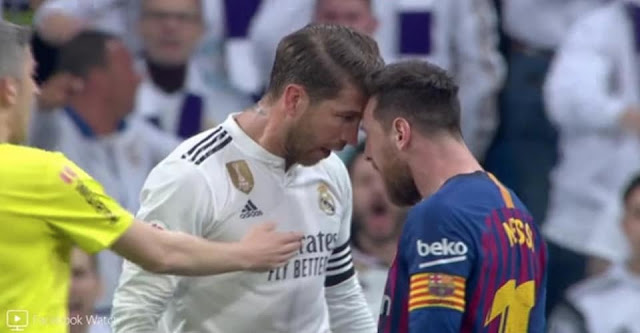 ↑ Grab this Headline Animato
Key Moments Recap :
Goal : 26′ 0 – 1 Ivan Rakitic
It’s a Messi-esque goal in truth as Rakitic is played in behind Real’s defence, and he coolly dinks the ball over the onrushing Courtois. 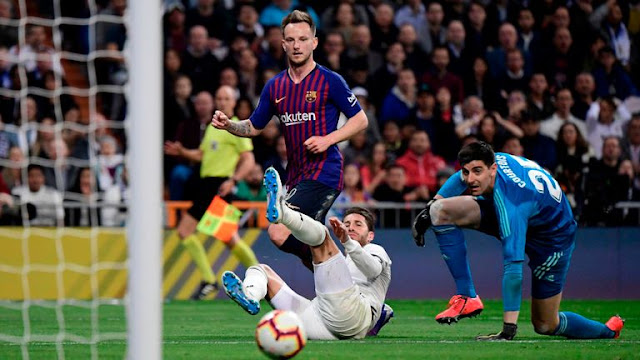 @realmadriden have won more
@LaLiga games against @FCBarcelona than any other side (72), while Barcelona have beaten Real Madrid the most often in the competition (71). Clasico

Real Madrid will be out to avenge their 3 – 0 Copa Del Rey loss to League bitter rivals FC Barcelona three days ago in front of their home fans (Santiago Bernebeu).

FC Barcelona will be hoping to complete a League double on Real Madrid, having defeated them 5 – 1 the first league fixture. A win against Madrid today will leave them twelve points apart on the La Liga standings.

Luis Suarez scored twice and Varane netted an own goal to complete Real Madrid’s disgrace and knock out from the Copa Del Rey during the midweek but despite Barcelona’s supremacy Ernesto Valverde doesn’t expect another easy win against Madrid this week.

“It’s difficult to repeat a result against the same opponent, but we will try to win because the league demands it.
“When you win, you gain confidence, but when you lose you want to reverse that, so it will be a tough match.”

Raphael Varner is expected to be fit for the Barcelona game, despite having a nasty cut in the game against the Catalans during the midweek. Marcos Llorente is also a doubt due to muscular problem.

FC Barcelona have no injury concerns ahead of the game.