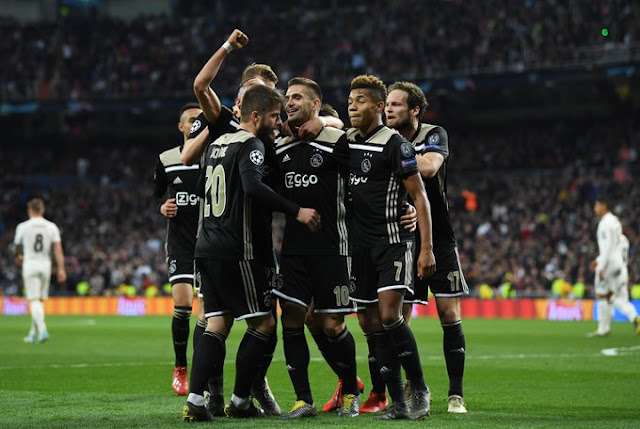 Key Moments Recap :
Goal : 18′ 0 – 2 David Neres
David Neres is the hero but none of that would have been possible without a sensational assist from Dusan Tadic, who weaves and spins his way through the Madrid defence before slotting Neres into space in the area, who round the on-rushing Courtois.

Goals : 7′ 0 – 1 Hakim Ziyech
Real Madrid lose possession cheaply on the left flank, allowing Tadic to break into the area. He draws one defender and shifts the ball across to the late-arriving Hakim Ziyech, who opens up his body and places a sumptuous effort into the bottom left-hand corner.

Goal: 62′ 0 – 3 Dusan Tadic
Ajax rip Real Madrid apart with a stunning third goal. A flowing counter attack ends with Dusan Tadic picking up the ball on the edge of the area and he rifles an unstoppable effort into the top left-hand corner.

Man Of The Match : Dusan Tadic

Real Madrid will look to rebound from their back to back losses to Spanish rivals FC Barcelona in their UEFA Champions League Round Of 16 second leg clash with Ajax at the Santiago Bernebeu.

Real Madrid came out victorious in the reverse fixture three weeks ago and despite their poor form, are clear favorites to advance into the Quarter Finals of the competition.

Centre-back Lisandro Magallan and midfielder Carel Eiting won’t be on the team for Ajax, as in the First Leg.
Sergio Ramos is suspended and will be the only player to miss the second leg with Ajax.