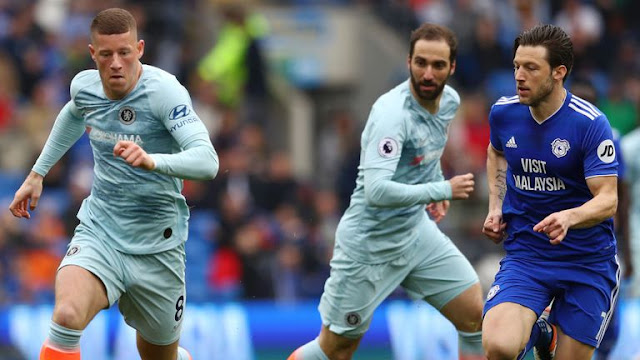 Goal : Victor Camarasa
Cardiff lead thanks to a brilliant goal from Camarasso, Gunnarsson long throw comes back to him. He passes to Arter who curls a cross in and Camarasa is there to hit first-time into the back of the net, leaving Arrizabalaga rooted to the spot! Cardiff lead!

Goal : 84′ 1 – 1 Cesar Azpilicueta
Azpilicueta looks to be in an offside position as he nods the ball into the net! A corner swung in is nodded on by Alonso into his path for the Spanish fullback to score his first goal of the season.

Goal : 1 – 2  Ruben Loftus-Cheek
Unbelievable. Chelsea have taken a last-gasp lead and it’s Loftus-Cheek with the header. He meets a Willian cross at the far post and nods into the bottom corner! Relief for Sarri! The Cardiff fans cannot believe it!