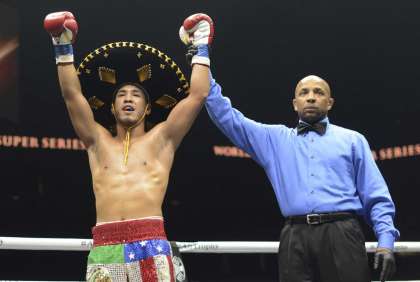 ↑ Grab this Headline Animator
Kendo Castaneda defended successfully his WBA NABO Jr. Welterweight Title with a Unanimous Decision vivicto over Eudy Bernardo in the main event of Roy Jones Jr Boxing card broadcasted live on UFC Fight pass.
Castaneda dominated and outboxed Bernardo from the opening bell and took most of the rounds. At round five, the fight already looked like Bernardo needed a KO to win the fight.
Castaneda was also warned for his numerous low blows in some rounds in the first seven rounds he dominated but outclassed Bernardo, even when he drag Castaneda into a slug fest in the third and fourth.
After the first seven rounds, Castaneda tanks got empty and Bernardo took over the fight, won the remaining rounds. The desperation was evident and glaring, but wasn’t enough to give him anything than a loss

Xavier Wilson lands a heavy ONE TWO and sends Arellano to the canvas in round 1! #RJJBoxing #UFCFIGHTPASS pic.twitter.com/iiizNclQev

A left hook from hell puts the lights out and the 22 year-old featherweight Henry Arredondo lives up to the hype! #RJJBoxing #UFCFIGHTPASS pic.twitter.com/SZfnQlAeeB