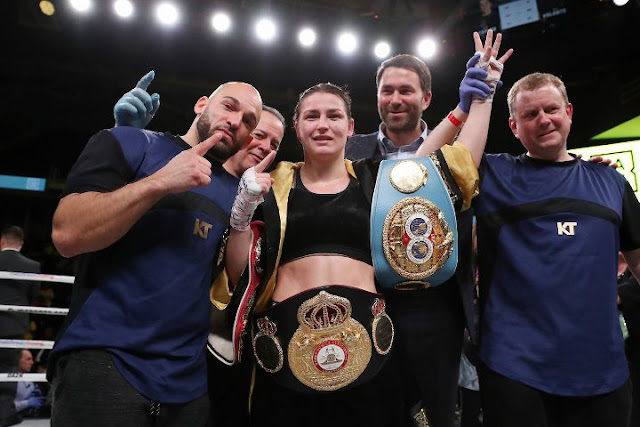 ↑ Grab this Headline Animator
Katie Taylor broke down and dominated Rose Volante, winning a 9th round KO that ensured she added the WBO title to her WBA and IBF women’s lightweight titles. Now she has one fight away from undisputed crown and thats with WBC Women’s champion Delfine Persoon.

“Now we can start talking about that fight with Defline Persoon,” Taylor noted after Friday’s win, almost breathing a sigh of relief as she remained squarely focused on first handling her business in Philly. “She has the WBC titie, I have the other three (lightweight titles). We have to make that fight next”

Taylor fought in the undercard of Tevin Farmer vs Jono Carroll and just as her stablemate, won their fights but Farmer actually has no idea about his next defense, a step Taylor already does and had preparations in place.

“She is truly the most driven, the most dedicated person I’ve ever met,” promoter Eddie Hearn told BoxingScene.com

“The fans see it. I’ve never been to a Katie Taylor fight where the fans leave saying they didn’t get their money’s worth watching her. Now, we have the opportunity for her to become the undisputed lightweight champion of the world.
“The opportunity, also, to have it as a part of this huge card at Madison Square Garden with Anthony Joshua in June. This is a chance for Katie to become a massive star, winning all four belts and then getting a fight with a superstar like Amanda Serrano after that.”

Katie Taylor (13-0, 6KOs), has fought eight times inside the last 20 months and has fought was her fourth over a reigning titlist, dethroning three at lightweight, including a 10-round shutout over previously unbeaten 130- pound titlist and former amateur rival Eva Wahlstrom.

She defeated Jessica McCaskill, who went on to capture a 140- pound title last October and is lokingl forward to adding more big names to her casualties. This includes  Cecilia Braekhus, the unbeaten long- reigning Welterweight champion and pound for pound queen.

“I would take Amanda Serrano or Cecilia Braekhus but I really want that last belt,” Taylor admits. “Those fights are so much bigger if I come in with all four (lightweight) belts.”