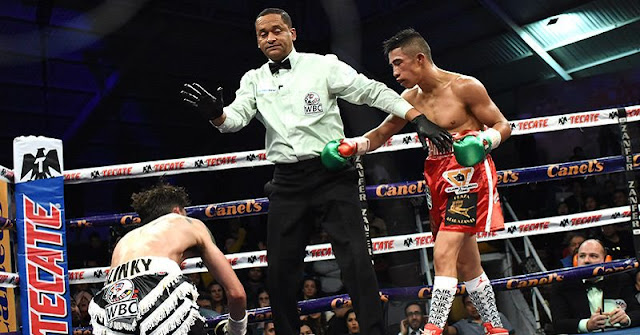 ↑ Grab this Headline Animator
Andrew Shelby recieved his first career loss in his visit to Mexico. Julio Cesar Martinez know knocked him out in the Fifth round of their WBC Flyweight title eliminator to become the new mandatory.
Martinez came into the fight on a 14 fight winning streak, after losing his professional debut in 2015. However, he has faced minor oppositions and was more of an underdog in the fight against Shelby.
Shelby’s right hand was countered by a series of shots, then a hook to the body in the fifth round of their scheduled 12 round bout, he fell to canvas and couldn’t make it back up to beat the count.

Delivered by FeedBurnerShelby who was a former stand out amateur, started well and had the fight early in his favor but this didn’t last long, as Martinez took over the fight towards the end of the third round.

An accidental clash of heads opened up a cut on Shelby’s left brow in the third but the ring side doctor approved the continuatcon of the fight. Martinez also enjoyed success in the fourth and fifth ending the fight with a hook to the liver.