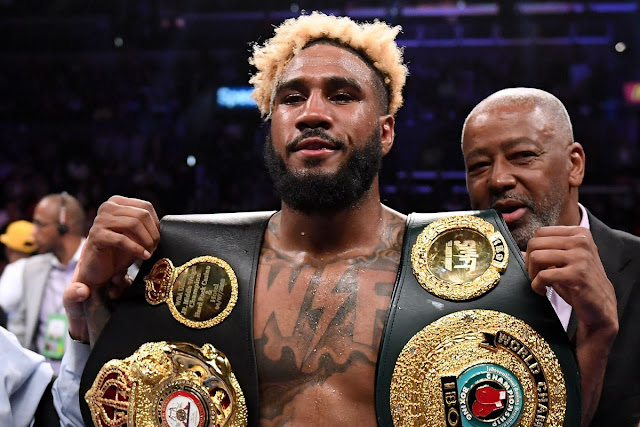 ↑ Grab this Headline Animator
Unified and undefeated IBF, IBO and WBA Junior Middleweight Champion Jarrett Hurd (23-0, 16 KOs) will defend his titles against top contender Julian “J-Rock” Williams (26-1-1, 16 KOs) at the at EagleBank Arena in Fairfax, Virginia. The fight will be the main event of a primetime in Premier Boxing Champions on FOX and FOX Deportes action on Saturday, May 11.
The fight will supported by a 10 round fight between middleweight contender Matt Korobov and Immanuwel Aleem, plus unbeaten super lightweight contender Mario Barrios battles Argentine Juan Jose Velasco in a 10 round battle.

Delivered by FeedBurnerJarrett Hurd has been dominant at junior middleweights recently and presently holds three titles at the weight class defeating Tony Harrison for a ninth-round knockout to capture the IBF title in 2017 and dropped Erislandy Lara, to earn the WBA Title with a split decision.

“I couldn’t be happier to be fighting at home for the first time as a champion,” said Hurd. “My hometown has been asking me to bring the championship back home and now I can. Julian Williams is a tough opponent and I don’t see him as a stepping stone. He’s crafty, technical and fundamentally sound. I want to go out and get a decisive win and show that I’m on a different level than everybody else in the division.”

The ones beaten  Julian Williams is coming into his second world title shot on the back of four consecutive victories, including victories over former world champion Ishe Smith and contender Nathaniel Gallimore. His most recent victory came in December, knockout victory over Francisco Javier Castro on December 1.

“Jarrett Hurd is a good, strong fighter that’s really hot right now,” Williams said. “This is a hometown fight for him, but Philly isn’t that far from Virginia. I’m looking forward to putting on an exciting fight for all of the fans on FOX, and most importantly winning those titles and showing the world that I am the best in the 154-pound division.”