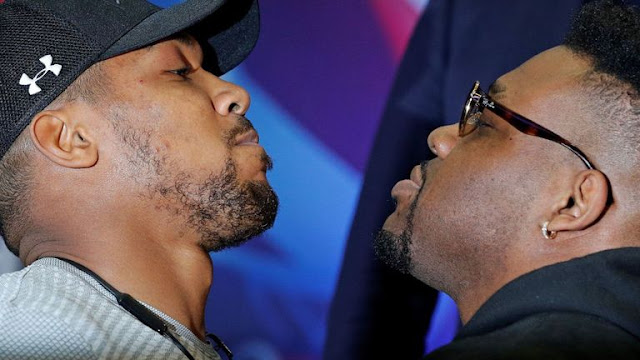 ↑ Grab this Headline Animator
Undefeated Heavyweight contender Jarrell Miller is been known for his outspoken nature and abusive way of promoting fights, which he has always kept by living up to his hype, earning him a reputation in the Boxing World.
Miller, who is set to welcome IBF, IBO, WBA  WBO Heavyweight Champion  Anthony Joshua to the US, with hopes of taking his titles has already made himself an angry opponent with his trash talk and promotional antics.
Adding to his crashing the Joshua-Povetkin press conference, making Joshua unhappy with profane names and shoving Joshua in their recent press conference in New York, Miller has finally added a prediction for the fight.

“Wow, there are so many ways. I don’t like to make predictions, but I’m going to knock him out in the seventh” Miller said
“Hands down, I’ve seen it, I’ve portrayed knocking him out in the seventh round.
“The combination, I don’t know what punch I’m exactly going to hit him with. I think an overhand right, left hook to the body. But, I do know this, my mental fortitude is way bigger and way better than his.

Delivered by FeedBurnerDue to profiles and other things attached meeting goals and pleasing the Fans with their dream matchups  fighters tend to overlook their immediate opponents and think more about future match ups but despite Miller’s prediction and expectations for the fight, he seem not to be looking beyond Joshua and expects him to do the same.

“This is everything, this is the changing point in my life to get to the next level. AJ was saying something before today, ‘I’m not looking past him,’ he can’t think about the future.
“But you don’t want to look past anything, you want to focus on that date, you want to focus all your concentration on that man. This is what it’s all about.
“I’m not looking past him, but I know once I beat him, I can help so many other people around me, and countries and communities.

“I’m never looking past AJ, he’s not going to be looking past me, but boy he’s got a butt-whupping waiting for him.”

Undefeated Heavyweights Jarrell Miller and Unified Champion Anthony Joshua will fight for the IBF, IBO, WBA and WBO titles in New York City’s Madison Square Garden on June 1. Live on Skysports Box Office in the UK and DAZN in America.