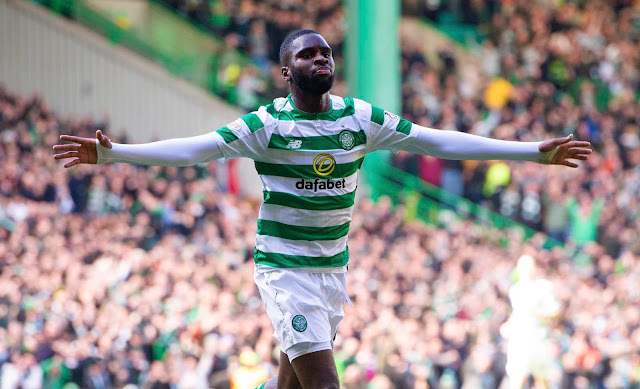 ↑ Grab this Headline Animator
Key Moments Recap :
Goal : 27′ Odsonne Edouard 1 – 0
The striker picks up the ball on the half-way line and has Scott Brown in support in the centre, but he goes alone, escaping Halliday and Worrall to fire the ball past McGregor at his near post!
It’s four goals in five for Edouard in this fixture, and he collects a yellow card for his celebration.

Red Card : Alfredo Morelos
Morelos has been sent off! Off the ball he catches Scott Brown with an elbow. It’s seen by the assistant referee and that’s his fifth red card of the season. When will he learn? It’s astonishing. What a silly boy.

Goal : 63′ 1 – 1 Ryan Kent
He still has an awful lot to do, but he shrugs off Scott Brown, there’s not a challenge from Boyata, as the on-loan Liverpool man breezes past him and tucks his right-foot shot beyond Bain.
He gets a foot to it but he can’t keep it out! Cartwheels in the corner in from of the pocket of Rangers supporters. We have a game!

Goal : 86′ James Forest
James Forrest has won it for Celtic! It’s a sloppy pass from Tavernier and Celtic are away. Edouard looks up and sees Forrest is free inside the box, he keeps his cool and tucks his shot low to McGregor’s right to surely settle this!

Man Of The Match : Odsonne Edouardo