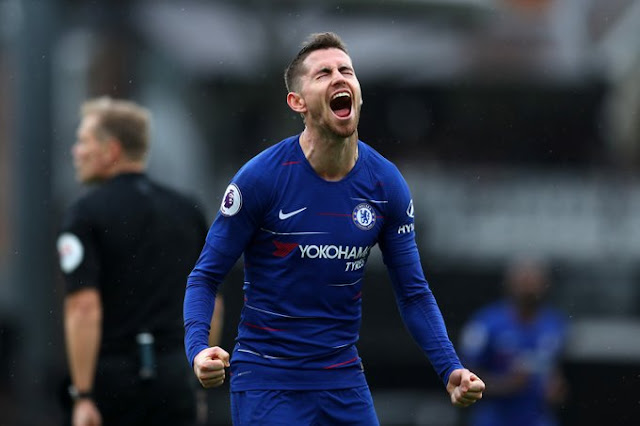 Goal : 20′ 0 – 1 Gonzalo Higuain
Willian and Azpilicueta combine down the right, with the full-back overlapping and then putting in a low cross for Higuain, who gets ahead of his marker and finishes nicely with a low shot past Rico.

Goal :  28′ Calum Chambers 1 – 1
Fulham play a corner short and Babel crosses to the back post where Chambers is wide open and volleys home from 10 yards out. Composed finish from Chambers, but that’s poor defensively from Chelsea.
Goals : 1 – 2 Jorginho
Hazard cuts in from the left and plays across the edge of the box for Jorginho, who goes for placement rather than power and tucks it very neatly into the top corner. Fulham had to part ways with Claudio Ranieri after their 2 – 0 loss on Wednesday but the survival issues still remain remains and might even grow worst  if they lose at home to Chelsea on Sunday, February 3rd.

The team is left under caretaker manager and former midfielder Scott Parker, who is now tasked with pulling the team out of the relegation zone, 2nd from the Bottom.

Maurizio Sarri’s Chelsea sit sixth, three points behind Arsenal FC in fourth place and stand chances of making the top four due to an outstanding game. Having defeated Tottenham Hotspur 2 – 0 in the midweek, the Blues will look to build on the victory and with confidence look clear favorites to bag the points against Fulham.

Goalkeeper Marcus Bettinelli and Defender Alfie Mawson are the only players sidelined due to injuries on Fulham list. Andre Schurrle is also out of contention, as he recovers from a virus.

Chelsea on the other hand have their full squad available for the clash which leaves  Maurizio Sarri with enough options for his squad rotation.