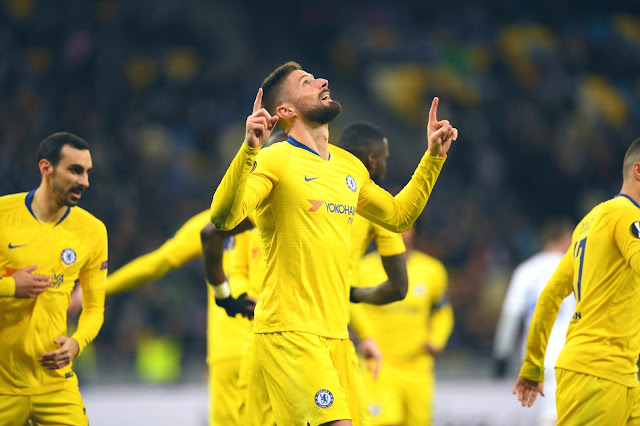 ↑ Grab this Headline Animator
Key Moments Recap :
Goal : 5′ 0 – 1 Olivier Giroud
Giroud heads in Willian’s corner for the opener with less than five minutes on the clock. It was a shocking bit of defending from Dynamo, who left the Frenchman to do as he pleased.

Loftus-Cheek shows some good strength in midfield to hold onto the ball, and allows Alonso to run with it down the left.
He curls in an excellent low cross ahead of Giroud who taps in calmly past Bushchan.
Goal : 45′ 0 – 3 Marcos Alonso

Hudson-Odoi assist to make it.
He plays a one-two which brings him off the right wing and into the box, and then lays the goal on a plate as he rolls the ball across the six-yard box for Alonso to slide home.

Goal : 0 – 4 Marcos Alonso
Giroud heads Willian’s free-kick from the right beyond Boyko for his Hat Trick .Defender Burda gets in a token jump to look like he’s trying to clear the ball but he’s nowhere near the Chelsea man who nods into the far corner. 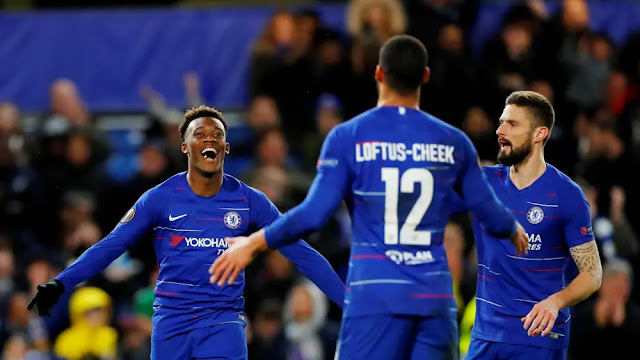 Preview
Chelsea FC finished the first leg with a 3 – 0 victory over Dynamo Kyiv, thanks to goals from Alonso, A Willian free-kick and a crowning goal from youngster Callum Hudson-Odoi but this time, Chelsea will now be the visitors in Baku.

With a three goal lead, Chelsea already have on leg into the Quarter Finals of the UEFA Europa League and are even tipped as favorites to win the competition but they will be going into this game on the back of   demoralizing 1 – 1 draw with Wolves over the weekend.

Maurizio Sarri and Chelsea FC will be heading into their 9th game in 25 days, having also Everton FC to visit during the weekend. The Italian is set to rotate his squad in order to maximize output in the two games.

Dynamo Kyiv had issues in their attacking third when they visited Stanford Bridge, due to the suspension of their top scorer Benjamin Verbic who will be returning to starting contention. His return might give Chelsea some defenside issues.

Dynamo Kyiv’s top scorer Benjamin Verbic will be returning back to contention after serving his suspension, Fran Sol remains injured and Midfieder Vitaliy Buyalski is suspended.

For Chelsea, Gonzalo Higuain Will miss the game due to illness while Marcos Alonso could be recalled after not being in the matchday squad.