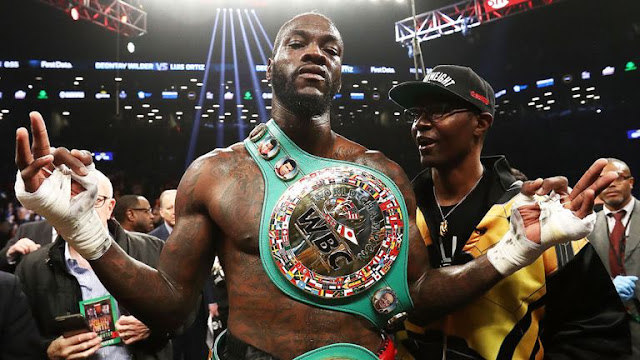 WBC Heavyweight World Champion Deontay Wilder has been ordered to defend his title against Dominic Breazeale, this coming after his rematch with Tyson Fury disappeared into thin air.

The WBC Released In A Statement

“WBC World Heavyweight Champion Deontay Wilder shall fulfill his mandatory obligations by fighting Dominic Breazeale next.
“This order constitutes the start of the free negotiations period for Champion Wilder’s mandatory defense of his title.
“If no agreement is reached between the camps, the WBC shall conduct a purse offer ceremony on April 4, 2019 at the WBC Offices in Mexico City, Mexico.”

Breazeale was named WBC mandatory to Deontay Wilder’s Heavyweight title since his impressive stoppage win over Eric Molina back in November 2017 and have kept their word by granting him a shot at the title.

Delivered by FeedBurnerWBC ranked No. 1 Dillian Whyte was initially ordered to face Dominic Breazeale, while the WBC Heavyweight Champion was out for a Rematch with Tyson Fury, after their first encounter ended in a controversial split draw.

Since Tyson Fury has refused a Wilder rematch, the WBC now gave Breazeale his deserved title shot, leaving Whyte to wait much longer for his shot.