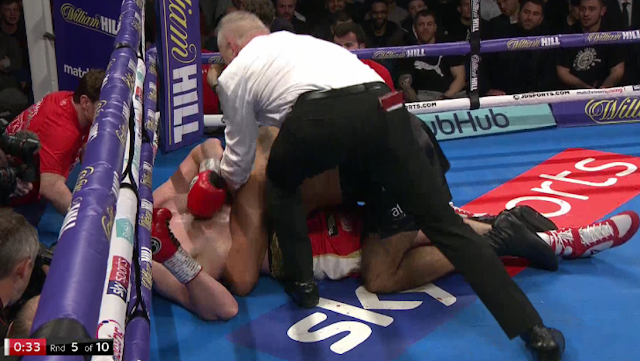 ↑ Grab this Headline Animator
David Price defeated Kash Ali Via Disqualification after an incident in tbe fourth round that gave the referee the impression that Price got bitten by Ali.
The referee stopped thetfight and decided to disqualify Ali, granting Price the win.
The fight started out more even, as both fighters struggled to get into their rhythm, Price worked behind his jab, while Ali’s Fast head movement gave him edge and he’s tried to work the body.

Price got really impressive with the body shots, Ali is kept his head low, avoiding Price’s power shots. He wasn’t taking any risk and took the second round on the cards

Price got real progress in the third and bloodied Ali, after opening him up with big shots, Price was having success with his right hand before accusing Ali of bitting him. This prompted a point deduction from the referee and also for a shot at the back of Price’s head.
After merely surviving the fourth round, Ali was hurt by Price and decided to bundle him down, the referee felt it was a deliberate act and believed he had ones again bitten Price. He disqualified him.