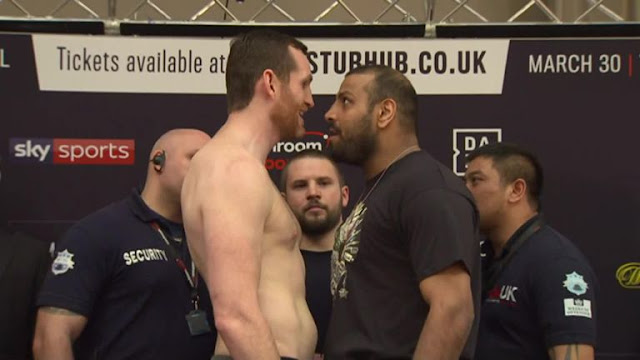 ↑ Grab this Headline Animator
David Price will share the ring with Kash Ali today, Saturday in the undercard of the Liam Smith-Sam Eggington bill at Liverpool’s M&S Bank Arena.
The heavyweights were ones sparring partners in the past and one friends but their build up to this fight has really been filled with harsh exchanges.
Ali had during the last media conference, called Price a quitter and this brought up an angry reaction from Price, who said he couldn’t stand for Ali calling him a “quitter”

“I won’t stand for that,” Price told Sky Sports. “I quite enjoyed the back and forth, people say it’s about time I did something like that but I haven’t had to because everyone been pretty much respectful.
“As far as I’m concerned, it’s a gentleman’s sport and something just triggered me yesterday and I thought I won’t stand for that. It doesn’t matter what he’s going to do, I’ve just got to go in there and do what I need to do.
“I think I will knock him out, I think I will knock him out but it won’t be early, if it is it will be a surprise because I know he can be quite cagey.”

Kash Ali is highly confident in his unbeaten record will remain after the fight, because he didn’t take anything lightly during training and claims he is much better than when he was Price Sparring partner.

“I’m 100 percent confident, I’m ready for this, I’ve been training hard and it’s my time to shine,” Ali said.
“When I sparred him I was not as good as I am now. He’s the same as he’s always been. I’m taking nothing from the spar. I just know, I’ve come to fight and I’m ready for this. It might not go that far, I might just knock him out early. I’m going to come out victorious, my hand will be raised at the end.”