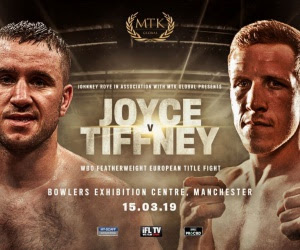 “I found out a lot about myself from that fight. It was my only defeat and there was a big amount that I learned, so it can sometimes be a good thing.
“There are some things that you only realise when you lose, so it definitely made me a better fighter and I don’t see it as a negative.
“I’ve got Joyce now and this is the perfect start to the year. I’m looking to pick up titles this year so I can’t wait.
“Once you get hold of that first title you can then push onto bigger and better things, but I’m not looking past Joyce and I’m fully focused on him.”

“He’s a decent guy and he’s a good, stronger fighter. I’ve never sparred him but I know his style. He’s a switcher. I’m not going to take anything for granted because he’ll come with a game plan.
“I won’t disrespect him but I’ve got an amateur record behind me and he hasn’t. I bring everything – all those experiences at world, Europeans and Olympic level – with me. He doesn’t have a good amateur record so I have it all to lose.
“I’m going to bring some people from Mullingar and he’s going to bring some down from Scotland and we’re going to meet on neutral ground. It’s neither of our hometowns but that’ll make for a very good atmosphere.
“This is a great show for MTK Global. Some people don’t have subscription channels and now all they need to do is watch it for free on iFL TV.”