Daniel Dubois vs. Richard Lartey At SSE Arena On April 27 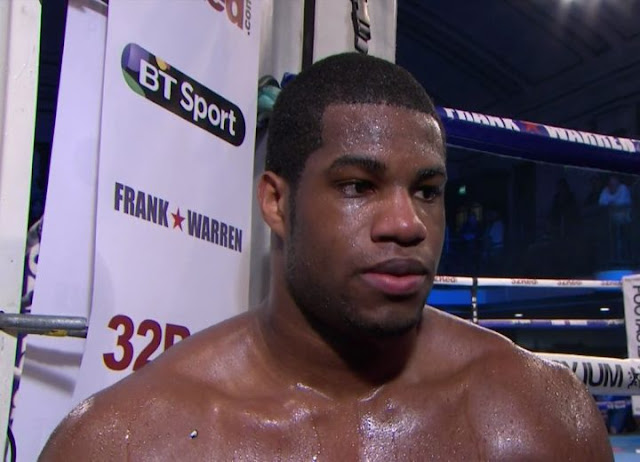 ↑ Grab this Headline Animator
Unbeaten heavyweight knockout artist Daniel Dubois will be back in action on April 27th, against WBO 14th rated Richard Lartey (14-1 11KOs) at the SSE Arena, Wembley. Live on BT sports.
Dubois (10-0 9KOs) is freshly coming off a knockout win over former world title challenger Razvan Cojanu at the Royal Albert Hall, which earned him the WBO European title, to compliment the WBC world Youth, Southern Area and English title honours already in his increasingly developing Resume.

“When Frank said I would be kept busy and would keep stepping up my progression it was music to my ears,” said the 10-0 star with nine KOs to his name.
“I was pleased with my last fight and with how I got the job done and I think you could see the improvements I have made since fighting Kevin Johnson.
“I want to continue being tested and showing people what I am all about. Lartey is a good opponent for me and will bring something different to what I have encountered before.
“He is a dangerous fighter but, as always, how the fight plays out will come down to what I bring on the night and I am confident I have got what it takes to pass this latest test put in front of me.
“I am looking forward to fighting at Wembley because, like the Royal Albert Hall, it is a place where the great British heavyweights of the past have been showcased and I hope the public get behind me in the same way they did last Friday because it made it an even more special night for me.”

Super lightweight Jack Catterall (23-0), who is ranked No. 1 on the WBO rankings will return for a tune up fight on the Card before he takes his mandatory fight against WBO Junior lightweight Champion Maurice Hooker.

Also on the card is unbeaten Sunny Edwards (10 – 0), defending his WBO European Super-Flyweight Championship against an undetermined opponent and already boosting big wins over Ryan Farrag and Junior Granados in his last two outings. There is no doubt the 23 year olds career is becoming a sensation at super flyweight.