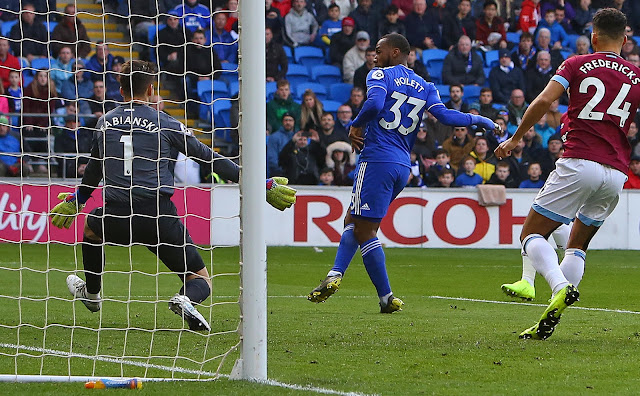 ↑ Grab this Headline Animator
Key Moments Recap :
Goal : 4′ Junior Hoilett 1 – 0
Cardiff lead and it is a very well worked goal. Camarasa plays the ball to Murphy down the right, the winger whips in a low cross and Junior Hoilett is there at the near post to flick the finish beyond Fabianski.

Goal : Victor Camarasa 2 – 0
Cardiff double their lead! After a loose touch from Fredericks, Hoilett gets down the left and puts in a superb cross. Murphy unselfishly cushions the header back across goal for Victor Camarasa, who forces it home bravely. He pretty much tackled Fabianski to put it in.

Man Of The Match : Aron Gunnarsson

Cardiff City will welcome West Ham United with hopes of getting that much needed win that could see them leave the Premier League relegation zone.

They are currently two points behind Southampton, who take on third place Tottenham Hotspur but despite these possibilities, Cardiff Manger Neil Warnock doesn’t see the game as a must win.

“I don’t think it’s a must-win game but it’s a very important game in the calendar. There are other games between now and the end of the season that will become must-win games, especially against the teams around us.
“We have to try and get something out of this game and be more positive than we have been. The lads have been a bit flat this week because it has probably been our worst week in the Premier League.
“You can see the disappointment of not being up to their own standards. We have to get back to that against West Ham. We have been a bit down because of the goals we have conceded. We want to make sure against West Ham we are on it from the start.”