Skip to content
HomeFootball HighlightsChelsea 3 – 0 Leicester City : Conte Getting The Magic Back

Chelsea today at Stanford bridge gave the defending champions their forth away defeat this season, dominating the match from the start and registering their dominance early with an early goal just 7 minutes into the game.

Chelsea who seems their loss to Arsenal has shown improvement due to the change to Conte’s magical Juventus formation which was the magic behind their dominance today.
Nemanja Matic assisted Diego Costa with a flick, and that was all needed for Costa to register that early goal.
Eden Hazard got himself also on the score sheet after David Luiz had his free kick hit the bar and deflected to Hazard, who waisted no time to making it a goal in the 33rd minute.
Nathaniel Chalobah made his debut a wonderful one, with an incredible one Two assisted Victor Moses in the 80th minute to crown Chelsea win over the Champions.
Licester had Mahrez on the bench today and could not get a short on target, their performance wasn’t impressive at all, defensively they were no good always paving way for the Chelsea forwards, they were just all over the place.
N’Golo Kante had some good game on today which gifted him the man of the match award against his former side, the French international was so good with the ball today and would have had himself on the score sheet if not for Wes Morgan. 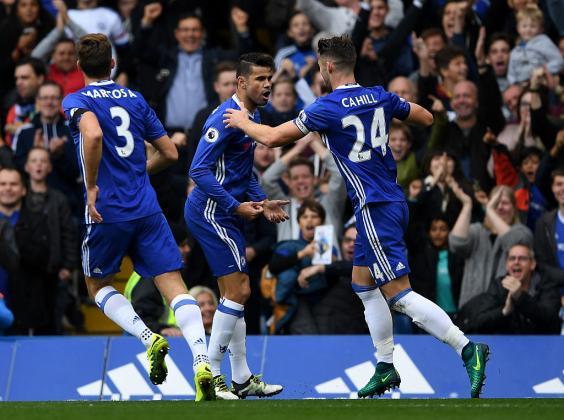