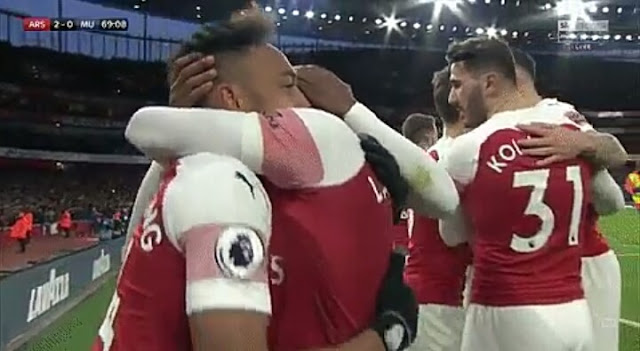 ↑ Grab this Headline Animator
Key Moments Recap :
Goal : 5′ Pierre-Emerick Aubameyang
Maitland-Niles gets away down the right-hand side, before putting the ball into the area. Aubameyang flicks it back for Ramsey, who the himself drives down the side of the box. The Wales international then pings the ball across the face of goal, and Aubameyang is there to poke home

Goal : 15′ Ainsley Maitland-Niles 2 – 0
superb work from Aubameyang, who did brilliantly to keep the ball alive after a pass through from Ramsey looked to be going out of play.
He then scoops it towards the back post and Maitland-Niles is there to nod home.

Goal : Pierre-Emerick Auba… 3 – 0
Mkhitaryan lays it off for him down the left and he then pings the ball into the area for the waiting Aubameyang, who once again slots home to nab his second of the evening. 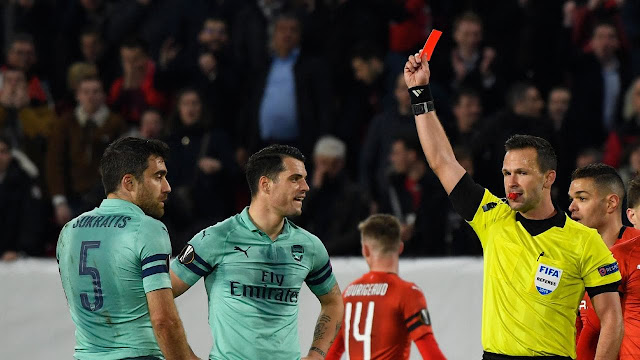 Preview
Arsenal FC recovered from their UEFA Europa League Round Of 16 First leg  3 – 1 humiliation in the hands of Stade Rennes with a deserving 2 – 0 win over Manchester United at the Emirates Stadium on Sunday.

The Gunners will be riding out with confidence, when they face the French side, nursing the possibility of overtuning the two goal deficit in-order to get their UEFA Europa League dreams back on track.

In the first leg,  Arsenal easily found themselves ahead with Iwobi’s strike but saw their French opponents recover to win the game after Sokratis Papastathopoulos’ first-half dismissal. Benjamin Bourigeaud’s jaw dropping finish, Nacho Monreal’s own goal and a late header from Ismaila Sarr’s gave Rennes a 3 – 1 victory at Roazhon Park.

Manchester United had in the past made the Europa League a route to the Champions League and Arsenal could also make that and option too, as the race for the Premier League top four gets more competitive.

Stade Rennes rotated third squad during the weekend and were still able to grind out a 3 – 1 win over Caen. Julien Stephan substituted top scorer Hatem Ben Arfa and Adrien Hunou in preparation for the visit to the Emirates Stadium.

Sokratis Papastathopoulos is suspended and thus giving Unai Emery the task of deciding whether to use a back four or use Granit Xhaka in a more defensive position as part of a back three.

Henrikh Mkhitaryan will need a late update on his back problem, that led to his absence in the Manchester United game. Other absentees include long term Hector Bellerin, Rob Holding (both knee) and Danny Welbeck (ankle).

Stade Rennes will have no new injury concerns. Right-back Romain Danze and midfielder Rafik Guitane are the only injuries in Julien Stephan’s list.