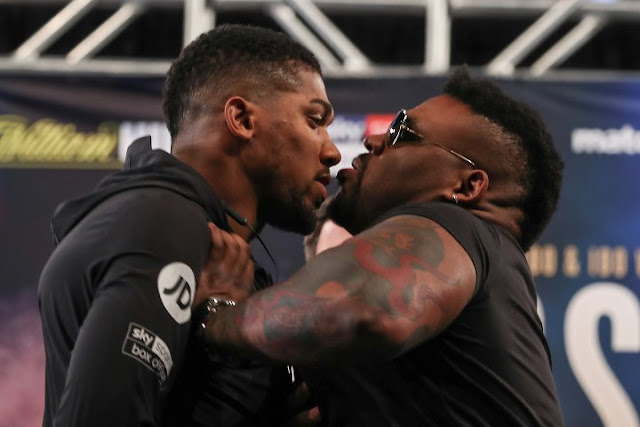 ↑ Grab this Headline Animator
Anthony Joshua will defend his WBO, WBA, IBF, IBO world heavyweight titles against Jarrell Miller at Madison Square Garden on June 1st and they are both trash talking and promoting the fights, predictions have already started trooping in.
The first of those comes from Light Heavyweight contender Lawrence Okolie, who predicts that the fight won’t be easy but his fellow Brit Anthony Joshua will stop Miller in mid rounds.

“It will be a good win, but it won’t be comfortable,” he exclusively told Starsport.
“Physically, Miller’s such a big guy and he’ll be coming all in.

“Grappling, heads, doing whatever it takes to bust up AJ. But AJ should be able to bust him up much faster, so I think that AJ will get a mid-round stoppage just from lightning speed shots over and over again.”

Delivered by FeedBurner
Lawrence Okolie might be a young fighter and has only been in the ring eleven times but has been able to rack up domestic titles at the light heavyweight division, wwhic includes British and Commonwealth light heavyweight titles after defeating Matty Askin and Luke Watkins, while also collecting the WBA Continental strap from Isaac Chamberlain.

He recently sparred with Tyson Fury ahead of his fight with WBC Heavyweight World Champion Deontay Wilder and had also been in sparring sessions with IBF, IBO, WBA and WBO world Champion Anthony Joshua. Asked about his experiences with the Champions.

“I feel like we both left camp with learning,” he summarised when recalling that spar with the ‘Gypsy King’.
“I was dealing with a taller opponent, a tricky opponent. Fury, he had to deal with my speed and athleticism.
“So it was good all round. It was good to see how he works.
“It was good to see the difference between someone physical and someone who prefers boxing. It was all good.”