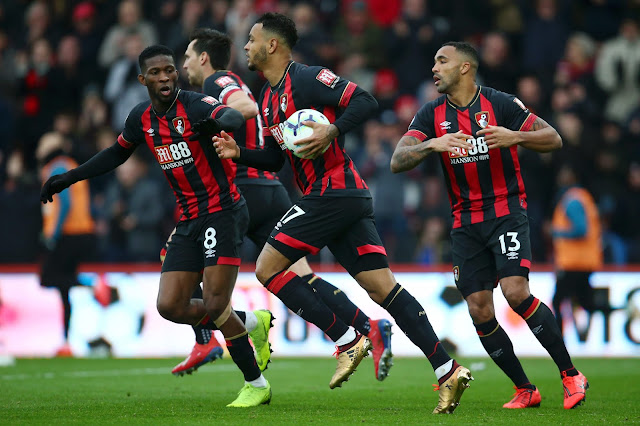 ↑ Grab this Headline Animator
Key Moments Recap :
Goal :  0 – 1 Salomon Rondon
A brilliant free-kick from Rondon! The Venezuelan striker curls his shot into the top corner and it gets the better of Boruc! Newcastle lead!

Goal : Joshua King (pen.) 1 – 1
Fraser’s corner is headed clear by Dummett but Dean points to the spot! Fernandez is deemed to have pulled down Ake. That is a soft penalty looking at the replays. King sends Dubravka the wrong way as he fires his penalty down the Slovakian’s right-hand side. We’re level!

Goals : Joshua King 2 – 1
Solanke sucks in a few Newcastle defenders in the box before laying it off to King, who tidily places the ball into the bottom corner using the inside of his right foot!

AFC Bournemouth will love to build on their defeat over Huddersfield Town last weekend, which ended their run if five games without a victory..
Newcastle on the other hand, are looking to swiftly secure Relegation safty after going four points closer to Rafa Benitez’s target of 38 points in their home win last weekend. However their last away game saw them lose to West Ham United.
Benitez said he has educated the players on the issues and also the need to be careful ahead of the game at the Vitality Stadium.

“You can see that the confidence is high, but again I have told them, we have to be careful.“Still the job is not done, so we have to keep working hard, we need to approach every game like a final, and if we do that and we don’t make the mistakes that we did against West Ham, we can compete against anyone.”

Newcastle United will not have their captain Jamaal Lascelles, who is out with a knee injury and Joins Sean Longstaff and Rob Elliott on the sidelines.