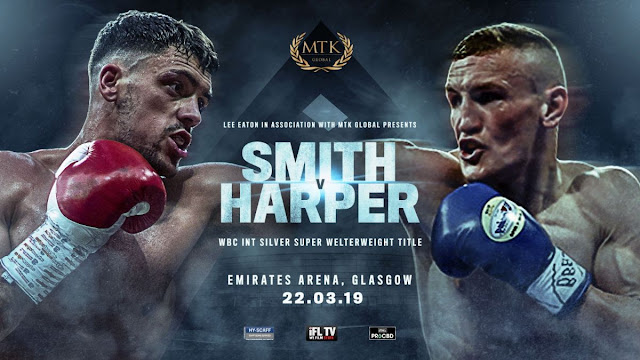 Adam Harper will take on the world-ranked super-welterweight Kieran Smith for his WBC International Silver title at the Emirates Arena, Glasgow on March 22, Live on iFL
MKT Global will be staging its third show at the Glasgow’s Emirates Arena, having had a successful fight night at the impressive venue in November 2018 and as usual, give Scottish talents a chance to get in the Global Stage.
Kieran Smith retained his WBC International Silver title with an an entertaining clash with Evaldas Korsakas in his last outing, while Adam Harper (9-1) defeated Billy Bird to win the English title at the Brentwood Centre in September 2018.

“I’m over the moon to be back at Emirates Arena for the third time in a row. It’s another important defence of my title and another step up in the quality of opponent.
“In the long term, I have big plans and dreams of becoming a world champion but in order to get there I know I can’t afford to take my focus away from dangers like Harper for a second.
“As well as the clear and obvious threat Harper poses, this occasion will be great because it’s a Scotland vs. England bout. That’s always special and I’ve no doubt the atmosphere in that place will be rocking.
“I’d like to thank all my supporters and sponsors last time and in advance for this time. It means so much to me to have them on my journey and I assure them I’m doing all I can to ensure that journey leads to glory.”