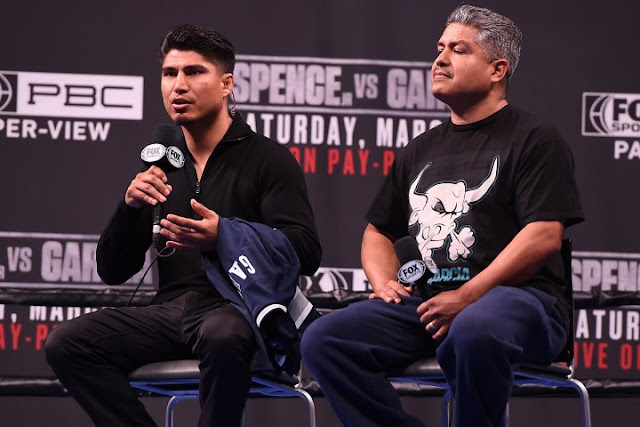 Mikey Garcia is taking a step most boxers wouldnt dare to take, which will require him going two divisions up to challenge IBF Welterweight Champion Errol Spence on March 16th at AT&T Stadium in Texas.

A move many in the boxing world will criticize both fighters for however, his elder Brother and trainer Robert Garcia actually believes Mikey Garcia could really pull off an upset come next month.

Mikey Garcia, the reigning WBC champion at 135 will be moving up 12 pounds to fight  Spence at 147 and Robert feels history could repeat itself.

“This is a big challenge for us to go up in weight to fight the best welterweight in the world. But it’s not like its’ never been done before and I know Mikey has the skills and power to pull it off. That’s what we’re coming to Dallas to do,” Robert Garcia said.
“This is an opportunity for Mikey to continue building his legacy. He wants to be known as one of the greatest fighters of all time and a win over Errol Spence Jr. is a big step toward that.
“I don’t think they’ve overlooking Mikey. “They know the talent he has. They’re getting ready for a great fight like they’ve done before. I think they know that they’re in for a real fight.”

Errol Spence is regarded a single one of the best at 147 and with the size and reach advantage, fans won’t be surprised to see the fight end early in favor of Spence. Who is already well vested in the division.

However, Mikey Garcia might actually use his speed and avoid getting caught with a heavy shot, if he is thinking of an upset victory. He has to his name two victories at Junior Welterweight (140lbs) against Adrien Broner and Sergey Lipinets on points