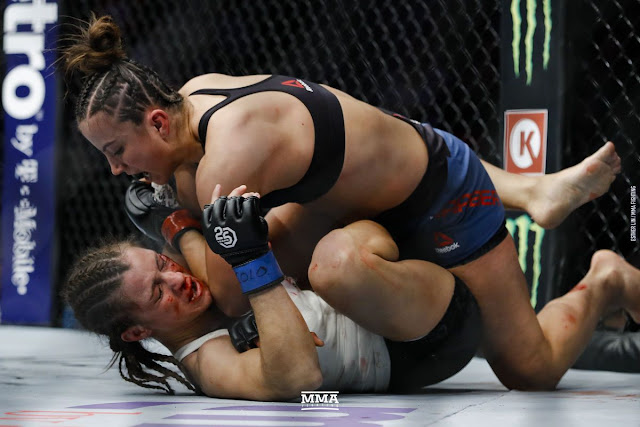 The UFC is been a stage for big names, which recently Conor McGregor  Ronda Rousey  Georges St-Pierre, Brock Lesnar,  Jon Jones and the list is set to continue with aspiring fighters lining up in the que, among them is Maycee Barber.

Maycee Barber (6-0) started her UFC career with a bang, a violent finish of Hannah Ciders in November and just couldn’t hide her plans from UFC President Dana White.

“I told him that I was gonna be as big, if not bigger than Conor McGregor and Ronda Rousey and all of the stars he has,” Barber told MMA Fighting. “And I am one of his next big stars. There aren’t very many right now, especially females. And I fit that perfectly. Just in terms of the person I want to portray in terms of the sport, I feel like I could fill that.”

Barber was introduced into the wild sport at a very young age of 3, when she started Her Karate lesson and has since had a pretty round – about experience in combat sports – from Brazilian jiu-jitsu to judo to boxing to wresting to Muay Thai.

Just like every teen, Barber had issues deciding which way to go in her professional career and had to make that big decision of choosing MMA over a University degree.

“I decided that I knew exactly what I was gonna do with my life and my career in terms of martial arts,” Barber said. “Either I was gonna fight or if fighting wasn’t gonna work out for me — which if I put my mind to something, it usually works out — that was what my life was going to be, martial arts. I don’t need a college degree, because I already had all the education I needed and I was continuing the education. That’s what I wanted to do with my life.”

Maycee Barber has won five of her six via stoppages and this according to her isn’t just a coincidence, as she derives pleasure from fighting hard for a win.

She will be back in the Octagon on March 23, when she faces J.J. Aldrich in a flyweight bout at UFC Nashville.