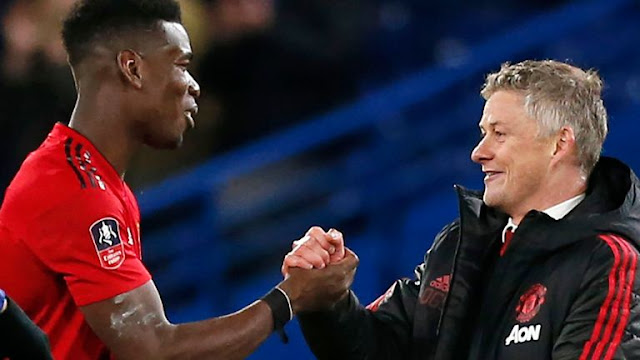 Manchester United under interim manager Ole Gunnar Solskjaer defeated Chelsea in the FA Cup fifth round on Monday, his third Premier League top six opponent since taking over from Jose Mourinho in December.

United under Solskjaer have won 11 of their last 13 games but what shocked the pundits around the world, was the teams ability to bounce back from their 2-0 UEFA Champions League loss to PSG with a win 2 – 0 win of their own in a turf they have had no success on in 23 attempts.

Knocking FA Cup defending Champions Chelsea out of the competition with two first half goals. This win which according to Skysport pundit Paul Merson, further solidifies him as the one for the permanent position.

“To bounce back like that, I see them going into this game on Sunday with every chance of beating Liverpool. I think if Liverpool come away with anything, it’s a good result. That tells me Ole is doing something right at the moment.
“If they beat Liverpool, I’d be shocked if he didn’t get it then.

Merson also compared the United atmosphere few months back with that at Stanford Bridge, tipping Manchester United to seal a top four spot before the end of the Premier League season.

“That place was going absolutely nowhere three or four months ago. They’re getting ripped to shreds by PSG at the end of the game, and Ole still has 60,000 people singing his name.
“If you’re the owner, you’re sitting there thinking: ‘How great is this?’ Three or four months ago, it would have been toxic.
“Watching Monday’s game I’d be shocked if they didn’t get in the top four, and I think that’s as big as winning the FA Cup, because they looked a million miles off it. This is the biggest club in the world in my opinion, and they need to be in the Champions League.”