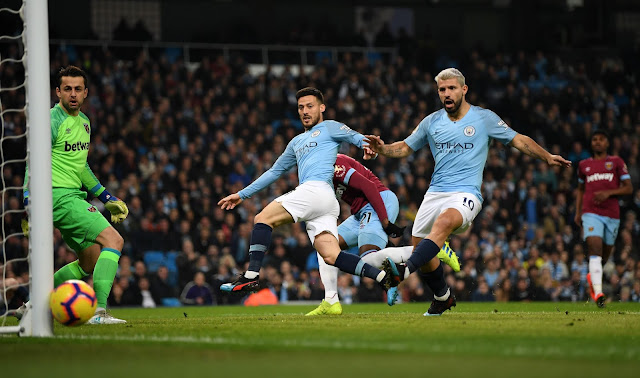 ↑ Grab this Headline Animator
Key Moments Recap :
Goal : 59′ Sergio Aguero (pen.) 1 – 0
Cometh the hour, cometh the man. It’s Sergio Aguero, and he steps up and finds the bottom corner – that same corner that saw Kepa dive over the ball – but Fabianski dives the other way. Relief all over the face of Guardiola, who couldn’t watch. City finally ahead.

Man Of The Match : Ryan Fredericks

Manuel Pellegrini will be returning to the Ethiad first the first time since 2016, when he was sacked two years after leading the Citizens to a Premier League trophy.
Manchester City on the other hand are still fresh with Celebrations after winninw their first major silverware of the 18/19 season and have won their last 13 out of 15 games, scoring 17 goals in their last five games.
Manchester City have the perfect opportunity to top Liverpool with two points, if they win this clash and their fellow contenders Liverpool lose or draw Watford FC in the same night.
West Ham United have had a pour away  record against top six opponents, losing four and drawn one of their last five games in all competitions.

West Ham United will not have Jack Wilshere, Andriy Yarmolenko and Carlos Sanchez, who are still sidelined but Manuel Lanzini is set to be on the bench again.
Defender Winston Reid and Fabian Balbuena (knee) have both started training but the Liverpool visit seem to be too early.