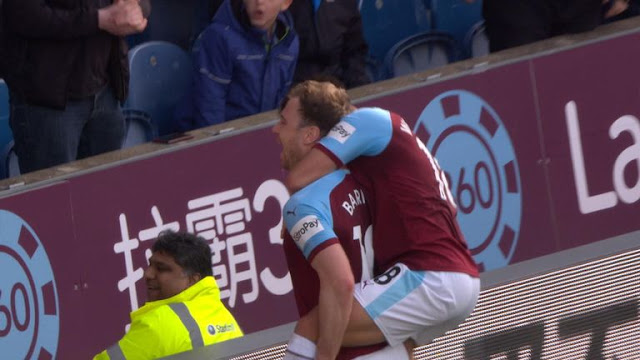 ↑ Grab this Headline Animator
Key Moments Recap :
Goal : 57″ Chris Wood 1-0
Chris Wood outmuscles Juan Foyth to get on the end of a whipped Dwight McNeil corner into the Spurs box, and he sends a headed into the back of the net via the crossbar.

Goal : 65″ Harry Kane 1 – 1
The ball goes out on halfway but Danny Rose pinches a few extra yards, racing forward and launching a long thrown down the left channel for Kane to chase.
He takes the ball in his stride and shows great composure to poke Spurs’ equaliser past Heaton and in off the right-hand post. Game on!

Goal : 83″ Ashley Barnes 2 – 1
Gudmundsson is the architect, gathering the ball in midfield, driving away from Eriksen and drilling a brilliant low cross into the Spurs area.
It evades Wood and Alderweireld but is perfect for the late-arriving Ashley Barnes at the back post, who strokes home from close range.

Man Of The Match : Ashley Barnes