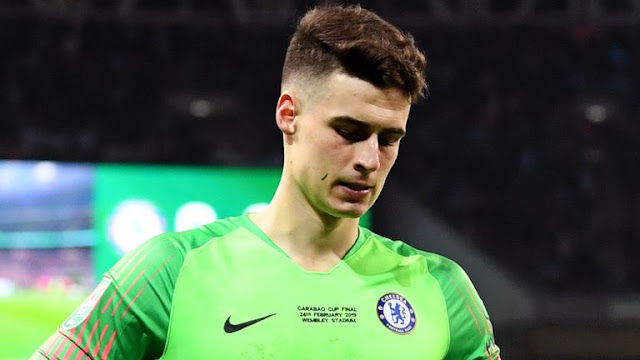 Chelsea FC goalkeeper Kepa Arrizabalaga has been fined by the club for his public defiance to been substituted in thh Carabao Cup Final loss to to Manchester City on Sunday.

The Spaniard refused to get substitute by Maurizio Sarri, who planned to replace him to with Willy Caballero towards the end of the extra time ahead of the penalties, leaving the Italian with rage on the touch line.

The incident was later laid low, as just a misunderstanding by the Chelsea Boss, with the 19 year old apologizing to his teammates and the boss for his actions. He also welcomed any punishment attached to his actions.

“I told him that I was gonna be as big, if not bigger than Conor McGregor and Ronda Rousey and all of the stars he has,” Barber told MMA Fighting. “And I am one of his next big stars. There aren’t very many right now, especially females. And I fit that perfectly. Just in terms of the person I want to portray in terms of the sport, I feel like I could fill that.”

Sarri didn’t rule out the Club punishing Kepa under the club rules but claims the paramount thing is his remorse and apology and that the Club now needs to move on from the incident.

“Kepa and I have spoken about the incident. It was a good conversation. There was a misunderstanding yesterday but he realises he made a big mistake in the way he reacted. He has apologised to me, his team-mates and the club.
“It is up to the club if they want to discipline him according to the club rules, but for me this matter is now closed. The team performance as a whole was extremely positive and it is a shame to see how this incident has overshadowed our efforts in what was a very competitive cup final.
“Everyone’s focus is now on the next game and we must all now put this behind us.”