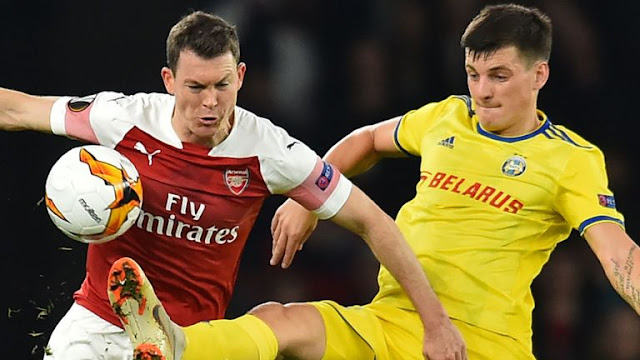 Arsenal work it over to the right, where Aubameyang leaves Filipovic chasing shadows. He crosses low into the six-yard box where Volkov looks like he’s got time to get it away but in almost slow motion, he stoops and controls the ball into the far corner of his own net under no pressure.

Arsenal are in front for the first time! Mustafi stoops at the far post to head in Xhaka’s corner from the left and give them the lead in the tie.
There’s big celebrations from Emery on the touchline, he must be a relieved man.

Arsenal have the third which should be enough to seal their progression, as Xhaka’s corner from the right beats Scherbitski’s despairing punch and lands on the head of Sokratis, who can’t really miss from six yards at the back post.