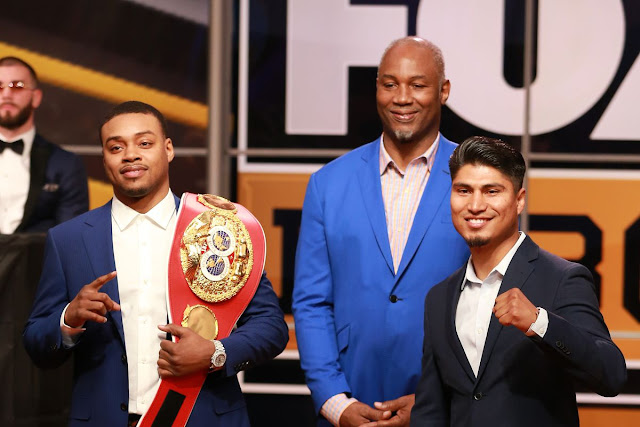 Errol Spence will be meeting fellow Pound for Pound fighter Mikey Garcia (39-0, 30KOs), who moves up two weight classes to face him, despite the big diffdiffer in size. live on Fox Pay-Per-View from AT&T Stadium in Arlington, Texas.

Mikey Garcia, who goes into the fight on the wings of a 12-round win over Robert Easter Jr. in their lightweight title unification clash last July, will be risking a huge size difference, height and a reach in his bid to create a legacy, against all odds.

Despite the criticism and notable differences mentioned above, Errol Spence who will be making his third title defense of his IBF Welterweight title in the match up believes that Garcia has much more to offer than people actually think.

“Overall, he’s very fundamentally sound,” Spence (24-0, 21KOs) said of Mikey Garcia “He’s coming to win. He says he sees something in me that he can exploit and I’m looking forward to it on March 16.
“He’s been saying in interviews he’s going to knock me out. Hopefully he brings that same energy into the ring.”

Spence had lots of Mega Fight and unification options to make at Welterweight, which includes Keith Thurman, Shawn Porter or Danny Garcia but has found it difficult to secure, having him settle for a two fight campaign 2018 with stoppage wins over Lamont Peterson and Carlos Ocampo.

Spence  who roles with the Al Haymon’s Premier Boxing Champions (PBC), has been inactive since the June of 2018 and had to turn of hopes of getting into the ring a third time for the preparation of PBC’s partnerspar with Showtime and Fox Sports.

“The most dangerous thing I see about him is that he’s fundamentally sound,” Spence (24-0, 21KOs) said of his unbeaten challenger. “He can switch gears. But the thing I respect most about him is his willingness to become great.
“He called me out and it was an easy fight to make. There was a little back and forth, some minor disagreements but it was an easy fight to make.”
“He’s great boxer with a high ring IQ,” Spence notes. “I’m prepared and ready to show the world that I have defense and a lot more skills than people want to believe.”