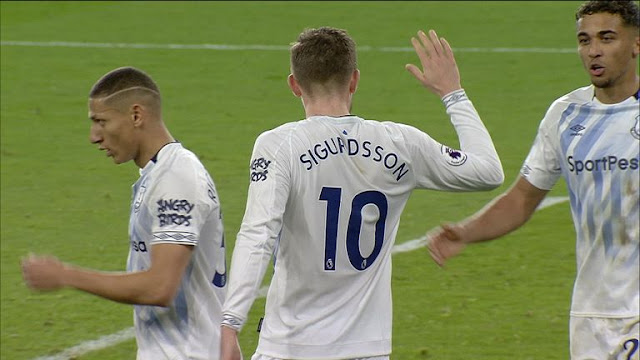 ↑ Grab this Headline Animator
Key Moments Recap :
Goal : 41′ 0 – 1 Gylfi Sigurdsson
Coleman runs down the right before looking up and picking out the Icelander in the middle, and he sweeps the ball into the far corner from 15 yards to net his 56th Premier League goal, and in doing so leapfrog Eidur Gudjohnsen to become the top-scoring Icelandic player in the league’s history.

Goals : 66′ 0 – 2 Gylfi Sigurdsson
Gueye has plenty of time to run before picking out the Brazilian on the left, he shows some quick feet to beat Manga before getting past the defender and shooting from a tight angle.
Etheridge’s dive keeps the ball out but Sigurdsson fires the rebound into the top corner with a superb finish to double the lead on the night.

Goals : 90′ 0 – 3 Dominic Calvert-Lewin
Gueye plays the ball into the path of Calvert-Lewin 25 yards out, with Cardiff’s defenders at sixes and sevens, and Etheridge can only palm his powerful effort from the edge of the area into the bottom corner. A good way for the 21-year-old to mark his 100th league appearance,

Man Of The Match : Gylfi

Both sides have met 36 times in the past and the Blues have had a very slim advantage on paper, winning 14 times, while Cardiff City have won the clash 13 times. 9 resulting in draws