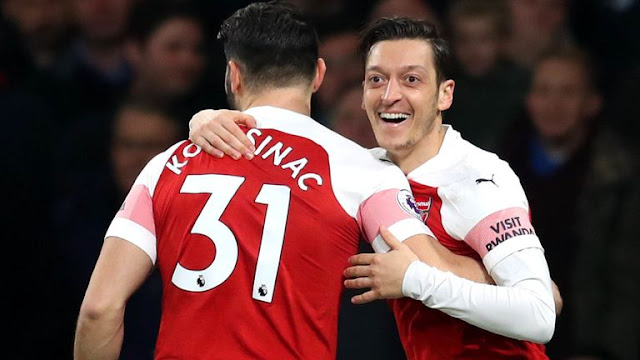 Key Moments Recap :
Goal : Mesut Ozil 1 – 0
Clyne and Mepham are both out of position with the other two defenders playing Ozil onside, and when Mkhitaryan slips the ball into him he gets into the box before lifting it over Boruc’s arm, raised in despair, and into the back of the net.

Bournemouth have done so much to get themselves back in this game but they’ve thrown it all away with an awful bit of defending. Smith’s sloppy ball across the back is easily picked off by Mkhitaryan, who feeds Ozil in the middle in space.
He moves into the area and looks ready to pull the trigger, but with Boruc committed slides the ball back across for Mkhitaryan to slot in his second goal in four days.

Goal : 2 – 1 Lys Mousset
Guendouzi, look away now. The Arsenal midfielder receives the ball on the edge of the box from Leno and is not ready for a robust challenge from Gosling – which some would give as a foul, but looked soft – and all of a sudden Bournemouth are clean through. He squares for Mousset, and the Frenchman tucks away his first Premier League goal since April.

Man Of The Match : Ozil

Unai Emery’s Arsenal FC made their way into the top four in their last outing , howbiet with just a point above injury striken Manchester United and three points above Maurizio Sarri’s Chelsea.

They will look to solidify their position with a win against their visitors AFC  Bournemouth  who will also be out for a win of their own when they visit the Emirates Stadium on Wednesday night.

Bournemouth have had a very bad away record and have lost every away game since October 27th, conceding up to two goals in each.

Alex Iwobi and Stephan Lichtsteiner might be missing in Arsenal line up, as they need late fitness assessment before the game, with both norturing Ankle and Back injuries respectively. Danny Welbeck (ankle), Hector Bellerin and Rob Holding (both knee) are long term absentees