Skip to content
HomeBoxingAnthony Joshua : Nothing Positive About Jarrell Miller, A Rotten Disease

Anthony Joshua : Nothing Positive About Jarrell Miller, A “Rotten Disease” 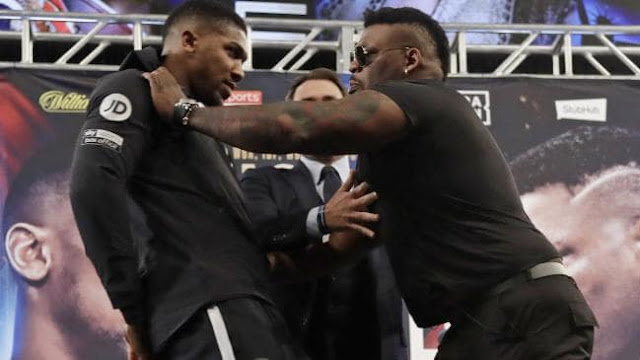 Undefeated unified World Heavyweight Champions Anthony Joshua was called so many names by his challenger Jarrell Miller in the press conference ahead of his American debut on June 1st.

Names like Uncle Tom, a drug dealer and  pothead were heard on that day and as usual more will be heard during the build up to this fight and for Anthony Joshua, this will be a very emotional trip, which will require a lot of self discipline.

The Champion during his encounter with the Miller in their press conferences, has already concluded that he won’t be having any good statement coming his direction from the American. He also appeared to give a prediction for the fight.

“These boys are getting a lot out of the pot in order to fight,” Joshua told a group of reporters before a press conference Tuesday at The Garden. “So that’s always gonna be enticing him to fight. It’ll raise his profile, but all in all, June 2nd he’ll be irrelevant. So, it doesn’t matter how much he wanted this fight. I just think if you cut Jarrell in half, he’s just a negative person, a foul person, and don’t have much good to say about anyone or anything. So, if you ask Jarrell Miller about anything, he’s probably gonna talk sh*t. That’s just how he is, isn’t it?