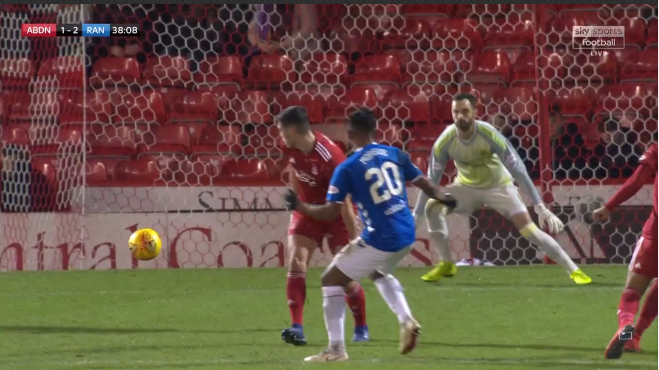 20″ 0 – 1…Morelos is in the right place at the right time! Kent drives down the right-hand side of the box and powers a shot on goal. Lewis does well to parry the venomous strike away but Morelos is there to slot the ball into the empty net to give Rangers the lead!
That’s Morelos’ 22nd goal of the season.

31″ 1 – 1 : The hosts equalise! Ferguson’s controlled half-volley deflects off Tavernier and Goldson before dropping to Cosgrove who taps in from close range!
A fantastic response from Aberdeen! The top two goalscorers in the Scottish Premiership are at it again!

38″ 1 – 2 : Morelos steps up and delivers again!
Kent surges through the middle and lays the ball off to Morelos on his right. The 22-year-old Colombia international shows his quality by casually stroking the ball into the bottom left corner. A fine goal!

38″ 1-3 :  Tavernier elects to drill his penalty to his right, Lewis gets a hand to it… but the power of it sees the ball fly into the net! Rangers have breathing space now!

90+4″  2-4 : Clinical from Defoe! Tavernier lays the ball off to the 36-year-old before he slots the ball away with ease. That’s four goals in five games already for Defoe!

Man Of The Match : James Tavernier

Rangers have New signings Glen Kamara and Matt Polster, who are building up their fitness while Injuries include Graham Dorrans (knee), Eros Grezda (ankle) and Jamie Murphy (knee). Defender Connor Goldson will be waiting for a late fitness assessment.

Aberdeen have only central defender Scott McKenna, missing with injury. Sam Cosgrove and Michael DevinD have all recovered for the clash