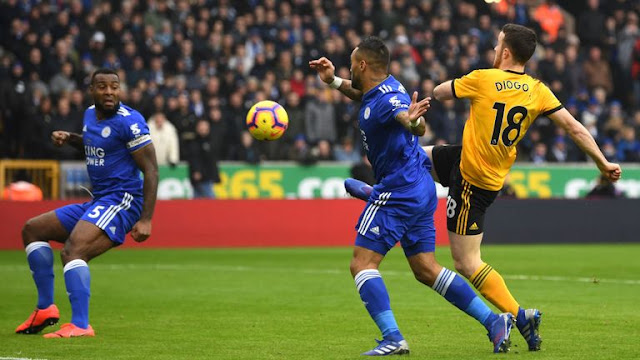 Key Moments Recap :
4″ : Seconds after Schmeichel’s stunning save the Leicester goalkeeper is breached for the first time. It comes from another great ball in from the right as Moutinho’s cross is dispatched by Diogo Jota, who outmuscles Simpson to finish from close range.
12″: Ryan Bennett doubles Wolves’ lead from another Joao Moutinho assist. This time is comes from a corner as the Portuguese whips a cross into the six-yard box. Maguire has two defenders to mark, deals with the first but cannot prevent the late-arriving Bennett powering a header past Schmeichel.
47″ : Demarai Gray grabs a lifeline for Leicester as they start the second half with a bang. Vardy pounces on a loose ball after Bennett misjudges the flight on the ball and releases Gray into space with a great through ball. From there on it’s all down to Gray, who shifts away from Saiss before picking out the far corner with low strike. Game on!
Goals (4-3) And Cards
🌕2′ Nampalys Mendy
⚽4′ Diogo Jota 1 – 0
⚽12′ Ryan Bennett 2 – 0
🌕44′ Ryan Bennett
🌕45′ Diogo Jota |🌕Ricardo Pereira
⚽47′ 2 – 1 Demarai Gray
⚽51′ 2 – 2 (o.g.) Conor Coady
🌕58′ Wilfred Ndidi
⚽64′ Diogo Jota 3 – 2
🌕86′ Jonny Castro
⚽87′ 3 – 3 Wes Morgan
⚽90′ Diogo Jota 4 – 3

Man Of The Match : diogo Jota