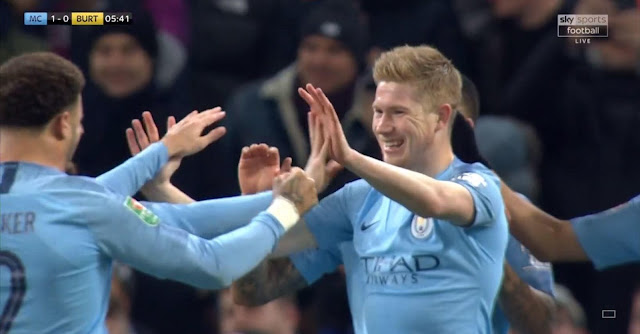 Key Moments Recap :
4 – 0………37″ : Burton were in the game 10 minutes ago, now they are surely out of the tie.
Zinchenko scores his first City goal in fortuitous style as he hits a first-time cross from the left that flies over Collins and goes into the net at the back post.
Burton Albion Vs Manchester City
3 – 0……. 34 : Oh wait, VAR is in action…
But the goal stands.
City are in complete control now as a ball is clipped into the box for David Silva. He controls and then lays across for Jesus, who finishes off the post.
VAR checked whether Silva was onside but he was in line.
2-0…. 30″ : Burton are caught ball-watching as Sane passes to Gundogan, runs into the box unmarked and gets the ball back with a chipped pass.
Sane controls and then sees his shot from a tight angle saved, but Jesus is quickest to react as he leaps and nods in the rebound from close range.

1 – 0 … … 5″ : Burton’s resistance is broken already.
De Bruyne lays the ball off, continues his run into the box and gets between the two centre-backs to nod in a David Silva cross from about eight yards out.

Man Of The Match : Gabriel Jesus

Manchester City 9 – 0 Win Is No Disrespect