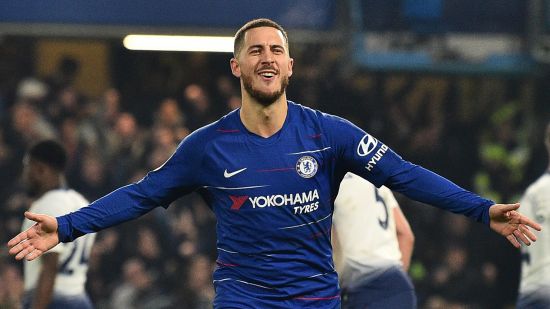 Key Moments Recap :
27″ : 1 – 0 There’s the Chelsea goal! It comes from the corner – which Hazard delivers – and is nodded away by a few Tottenham heads.
However, it only gets as far as Kante who has all the time and space to hit a fierce drive that flashes through the area – and three sets of legs – before beating Gazzaniga.
We’re level on aggregate here!
37″ : 2 – 0 What a wonderful goal from Chelsea and leader or not, Hazard has fired his side into the lead.
Chelsea have a free kick, which Barkley takes quickly, and the hosts just overwhelm Spurs from there. Hazard drives forward before finding Pedro on the right, who in turn slips the ball into the path of Azpilicueta.
The Chelsea captain then cuts the ball back for the waiting Hazard in the middle of the area, who fires the ball into the back of the net with aplomb.
Goals (2 – 1) And Cards
⚽ 27′ N’Golo Kante 1 – 0
⚽38′ Eden Hazard 2 – 0
⚽50′ 2 – 1 Fernando Llorente
🌕53′ Jorginho
🌕56′ N’Golo Kante
🌕66′ Cesar Azpilicueta
🌕73′ Moussa Sissoko
Chelsea Advance On Penalties ( 4 – 2) 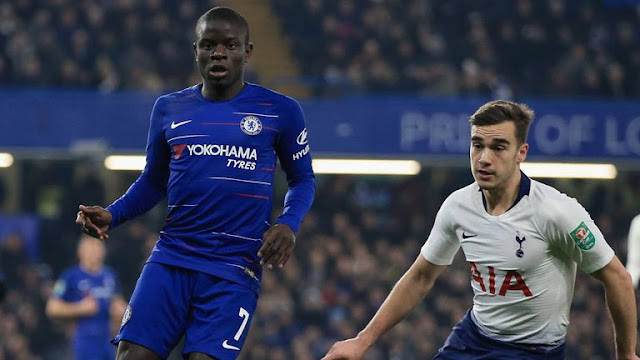 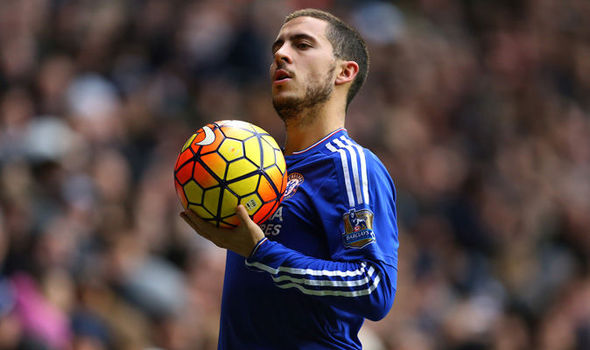 Harry Kane, Dele Alli and Heung-Min Son will not be available for Spurs, it’s not all bad news on Tottenham’s injury front, with Moussa Sissoko (groin) back in training, although it remains to be seen whether he is fit for Thursday.
Lucas Moura (knee) is back in full training and should be fit to feature at Stamford Bridge while Victor Wanyama, who has been out since November with a knee problem, is also back in training but is unlikely to be involved.

Gonzalo Higuain will not feature for Chelsea as his signing was not completed in time. Eden Hazard could continue as a ‘false nine’ or Olivier Giroud could start, with Alvaro Morata out of favour ahead of his expected departure to Atletico Madrid. Ruben Loftus-Cheek (back) is likely to be out again

“I am so optimistic,” Pochettino was quoted as saying in the Mirror . “We are going to prepare for Chelsea, try to find solutions. Try to be solid, aggressive, offensive and keep our identity.
“Of course it’s going to be tough. I don’t say we’re going to win easily on Thursday. But we are going to try. That is the most important thing and I know that afterwards I will be happy because the squad we have is going to give their best to be in the final.”

“this group of players are extremely difficult to motivate”. he said: “I think we need to react on the pitch. The rest is nothing.
“We discussed with the players how to try to improve the approach, the motivation, the determination, so we are trying to change something in training, in pre-match, in everything. I think we all have to react on the pitch, of course.”