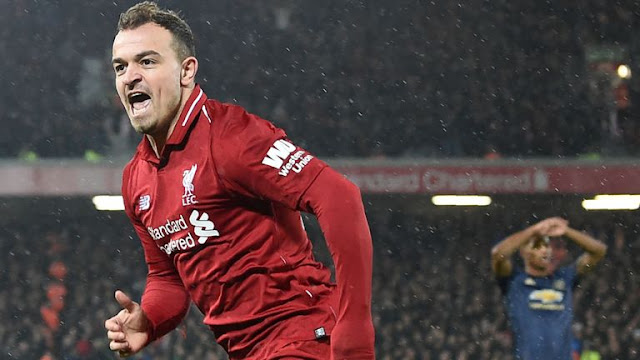 Liverpool’s Xherdan Shaqiri has revealed, his Friends sent some go messages to him after engineering a win against Manchester United at Anfield, their first in nine attempts.

The 27 year old Swizz came off the bench to help Liverpool with two goals defeat big rivals Manchester United, after which Jose Mourinho’s Sack was announced and his friends couldn’t help but blame him for it.

“I had a lot of messages from my friends when it happened,” Shaqiri, interviewed by The Guardian.
“There were a lot of good messages about the United game at first and then, when the news came out about Mourinho, I had messages saying: ‘That’s your fault!’ But this is football sometimes.

“I don’t think it was just because we won that game that United wanted to change their manager.
“There were other reasons but it means the game goes down in history. It will always be in my history too.”

Pochettino : Alli Is A Beast

Liverpool FC returned to the submit, going over Manchester City again with the victory and will be returning on Friday for a Premier League visit to Wolverhampton Wanderers (Wolves).