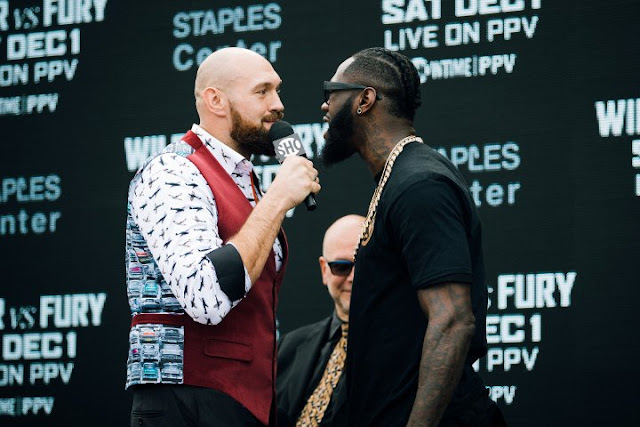 Tyson Fury will be hoping to defeat Deontay Wilder in third Heavyweight WBC Title fight today, a third fight in his comeback since returning back from a two year hiatus.

Tyson Fury has only faced below par opponents, since his comeback but believes, he is ready to get back into the title mix. He claims that Wilder is so flawed, he will easily defeat him convincingly.

He admitted the power Wilder possesses but questioned his level of opponents, claiming his opponents were hand picked, Scared before fights and calls on Fans to doubt his personality if he fails

“He punches hard but he didn’t fight anyone until he’d had 30 fights,” he said. “You can only knock out who’s in front of you but if you’re matched easily you get to 100-0.

“People are afraid before they get in there, like with Mike Tyson. They were just looking for a comfy place on the canvas.

“If I can’t beat Deontay Wilder then I’m not very good, simple as that. If I can’t beat Wilder I’m not the man I think I am. If I win a close fight I’ll class it as a loss because it’s not enough for me.

“How are you going to be considered a great if you can’t beat a bum who throws windmills?”

Deontay Wilder will defend his WBC Heavyweight title against Tyson Fury, a fight dimmed the highest test of his fighting career.