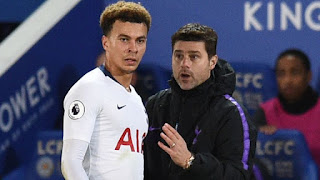 Tottenham Hotspur Boss Mauricio Pochettino saw nothing to describe his in form star Dele Alli except “an Animal and A Beast”  after showing incredible form in his recent outing for the Club.

Xherdan Shaqiri – I Am Blamed For Jose Mourinho’s Sack

Alli has been one of the key Tottenham Hotspur players this season, having helped the club to the UEFA Champions League Round Of 16 and also scored a looping and stunning goal against Arsenal in the Carabao Cup to propel them the the competitions Semi Final  where they will face Chelsea.

“All that he is doing is a fantastic thing. He has unbelievable quality to finish how he does. If you don’t have the quality it is difficult to finish like that.”

Pochettino is refusing to rule out the uncertainty of the future despite standing his team standing six points away from the top spot on the Premier League table. He claimed his team still has many flaws and this could affect their results in the future.

“At the moment we are playing well, but the moment we lose games it’s going to turn quick. I know that very well. This is normal.
“I try to understand everything. In this football club if some bad results arrive it’s going to turn again. All the positives will be reversed and become negatives.
“We are happy, but not so happy. I think there’s still massive work to do. But when I say ‘worst feeling’ I don’t speak about inside of the club. I talk about the perception outside.
“We are still fragile, not solid enough as a club to support some good and some bad because the perception of the people can affect the club.

Tottenham  Hotspur will visit Goodison park on Sunday, as they bid to close the Gap on League Leaders  Liverpool and 2nd place Manchester City.