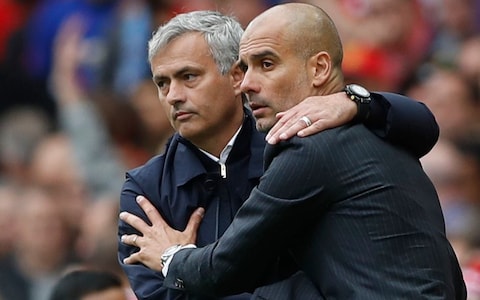 Manchester City Boss Pep Guardiola and Jose Mourinho have been taken, as big time rivals since their time in Spain and though the English League version of the rivalry wasn’t as glaring, as that of the Spanish. Guardiola isn’t really happy with the way Jose Mourinho time ended at Old Trafford.

Jose Mourinho was saked by Manchester United in the early hours of Tuesday, after two and a half years in charge of the Club, with the club’s worst start to a campaign in 28 years confirmed with defeat at Liverpool on Sunday.

Pep Guardiola told Sky Sports, after his team defeated Leicester City via Penalties to qualify into the Semi-finals of the Carabao Cup.

“When it happens I am sad for the managers,” Guardiola told Sky Sports . “When the situation is not good, we are alone. I am close with all of them. In football it happens, but when the results are not good you can be sacked.

“Of course he doesn’t need me, he is so strong. I wish him all the best and soon he is going to come back.”

Manchester City took the lead with Kevin De Bruyne’s opener in the 14th minute but that got canceled out by Leicester City in the 72nd minute and City needed Penalties to qualify.

Leicester City missed three penalties out of four, while only Raheem Sterling missed for City.