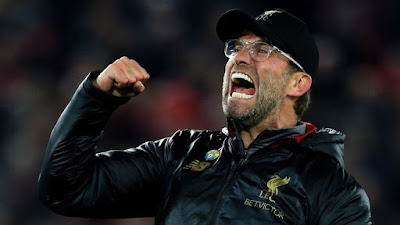 Liverpool Boss Jurgen Klopp has been hit  with a Misconduct Charge by the English FA, For his actions in the Merseyside Derby against Arsenal on Sunday.

Klopp had apologized for his Celebration in the Derby, He ran to the centre circle at Anfield when Divock Origi scored in the final moments to clinch a dramatic Merseyside derby victory.

Klopp had apologized for his outburst of Emotions, saying he never wanted to be disrespectful with his Celebration.

Luka Modric Takes 2018 Ballon D’or , ahead Of Ronaldo And Messi

“I didn’t want to be disrespectful but I couldn’t stop myself,” Klopp told Sky Sports. “It just happened.

“The plan was not to run [onto the pitch to celebrate]. When I chose to stop I was close to Alisson. He was surprised. It was the last situation of the game. Both teams delivered an unbelievable fight.”