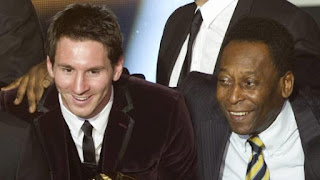 Brazilian legend Pele is not convinced that Lionel Messi is the greatest Football of all time and has dropped his opinionoof the Blaugrana star.

While many will say easily “He is the best”, Pele believes The five-time Ballon d’Or winner does not have the all-round game that he and Maradona once possessed.

Pele also made clear, many players like Diego Maradona will stand better chances of being named the greatest of all time before Lionel Messi will be considered.

“As far as I’m concerned, Maradona was one of the best players ever. If you ask me, ‘Was he better than Messi?’ Yes, he was. Much better.”