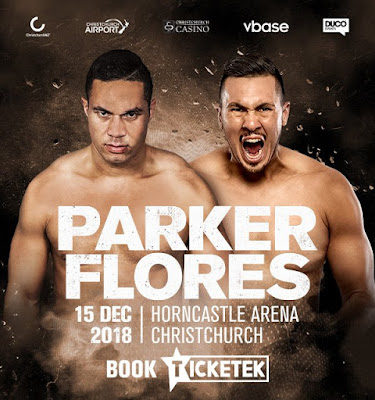 Booming with confidence, Flores doesn’t see himself losing such a career defining fight and says Joseph Parker will only be a step to making history, as the only Mexican American Heavyweight Champion.

“Beating Parker will get me a step closer to my goal to be the first Mexican-American to become world heavyweight champion,” Flores said. “I can’t picture myself losing, not the way I feel. I’ve had a long, hard training camp for this fight. It’s really been a couple years, because some fights fell through.”

Flores believes he can adapt to the traveling issues. Also accepting that,  he his the Underdog going into the fight in a very Unfriendly territory but, actually sees himself knocking JoseJo Parker out.

“Yeah,” Flores explained, “that was my first flight. It took 13 hours, but I slept five or six hours, so it wasn’t too bad, other than being a little cold there. New Zealand is a beautiful country. The only thing I really need to acclimate to is the 20-hour time difference.

“I’m not concerned about fighting Parker there. I know I’m the underdog, but I had to take advantage of this opportunity. We were supposed to fight November 24th, so I had already waited a long time for a fight like this. At the end of the day it’s just going to be me and him in the ring. I’m going there to win, I see myself knocking him out.”

Joseph Parker is coming into the fight on the back of two unanimous decision losses, one saw him lose his title to Unified Heavyweight Champion Anthony Joshua and one to contender Dillian Whyte – Check Out Our Boxing Page For More information