Skip to content
HomeBoxing NewsJermell Charlo : Won’t Be Fighting His Twin Brother Jermall For Any Amount

Jermell Charlo : Won’t Be Fighting His Twin Brother Jermall For Any Amount 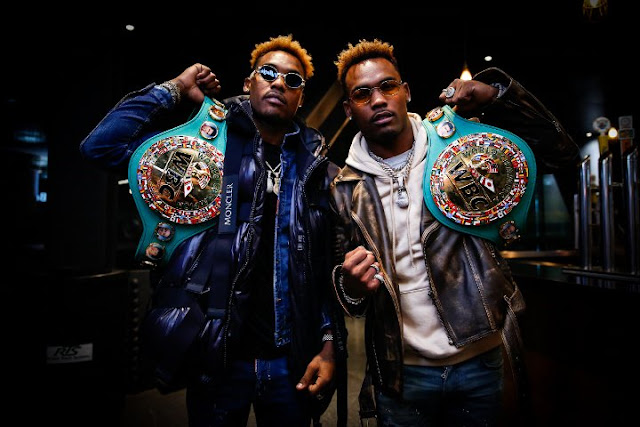 WBC junior middleweight titleholder Jermell Charlo has made known he has no intentions of facing his brother Jermall, who is presently at 160 Pounds for any reason while speaking on Saturday’s initial episode of “PBC Face-to-Face” on FOX.

“Right now, in our prime, I’m not fighting my brother. Period. I wouldn’t’ take a dollar. This is not tennis. We cannot play against each other. In this sport…He’s an animal. As a big brother, he taught me to be an animal, and I like that,” said Jermell, 28.

Jermell Charlo (31-0, 15 KOs) will be making his fourth defense and hoping for his fifth knockout win in six fights against Tony Harrison (27-2, 21 KOs), and his older by the minute brother Jermall Charlo  (27-0, 21 KOs) will be defending for the time, hopping for the fourth straight stoppage and 20th knockout in his past 22 fights against Russian southpaw Matt Korobov (28-1, 14 KOs) at Barclays Center in Brooklyn, New York, Saturday on FOX (8 p.m. ET/ 5 p.m. PT).

Carl Frampton Wants To do A Good job On Josh Warrington

This is the first time that both Houston, Texas Boys will be fighting on the same card since their ground breaking night, when Jermell came from behind for a title-winning eighth-round stoppage of John Jackson at The Cosmopolitan in Las Vegas, a feat preceding Jermall’s unanimous decision over left-handed former champion Austin Trout in his second of three IBF 154-pound title defenses back in 2016.