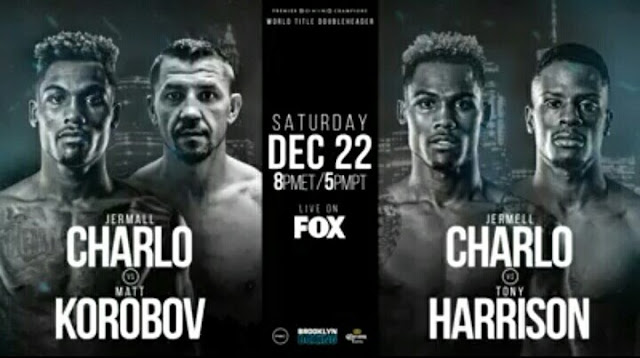 The Charlo’s will be in action on Saturday night, the Heavier Jermall Charlo (27-0, 21 KOs) will face Matt Korobov in the PBC promoted main event.

while his younger twin Jermell Charlo(31-0, 15 KO) will be meeting Tony Harrison (27-2, 21 KOs)  in the co – main event. Since knocking out John Jackson in eight rounds to win the vacant belt in Las Vegas, he has recorded wins over Charles Hatley (KO 6) and Lubin (KO 1) and only went the distance against Austin Trout in his last outing.

Harrison started his career with 21 straight wins, but has recently been stopped twice in eight fights and both within nine rounds, which also includes a failed bid for the vacant IBF belt against Hurd in February 2017.

Boasting a two inch advantage over Jermell Charlo at 6-foot-1 and has 21 knockouts since turning pro doesn’t seem to bother the WBC Junior Middleweight Champion.