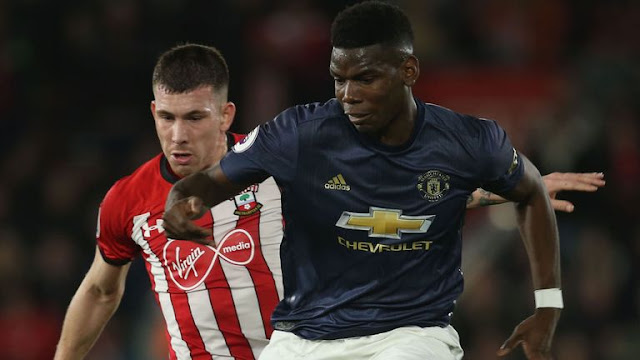 Manchester United lose another two points in their visit to St. Mary’s, they conceded two early goals against the energetic Southampton and had to fight back to get a draw by half time.
Goals (2 – 2) And Cards

Man Of The Match :  Nathan Redmond

Southampton have won just one of their last 15 Premier League matches (D6 L8), winning only against Crystal Palace in September.

Man Utd are without a win in three Premier League games for the first time since December 2017 (D2 L1) – the third game in both runs came against Southampton.

Southampton remain the only team in the Premier League yet to win a home game this season (D5 L2).

Mark Hughes has won just three of his last 25 Premier League games as a manager in the competition (W3 D9 L13).

Cedric Soares is the seventh player to score a direct free-kick for Southampton in the Premier League and first since James Ward-Prowse vs West Brom in February 2018.

Romelu Lukaku’s strike vs Southampton has ended a run of 12 games and 981 minutes without a goal for Manchester United in all competitions since netting against Watford in September.
No player has scored more goals against Southampton in the top-flight at St. Mary’s than Man Utd’s Romelu Lukaku (5 – level with Olivier Giroud & Robin van Persie).
Marcus Rashford has provided two assists in a single game in all competitions for Man Utd for just the second time in his career (also vs Crystal Palace in September 2017).