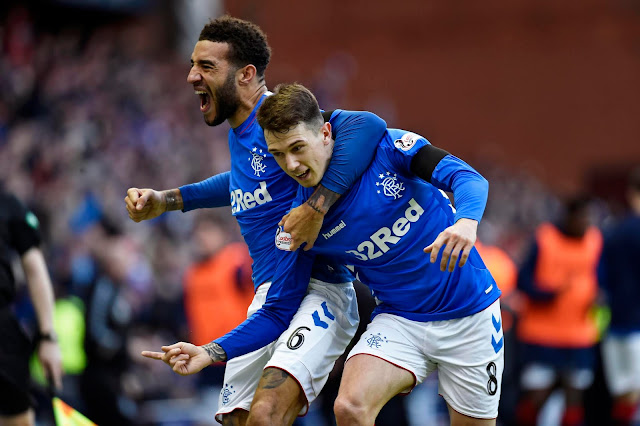 Live |88 minutes
Recap : Rangers Dominated Celtic at Ibrox for most of the first half duration and at some point, the visitors couldn’t get a hold on the ball for about 8 minutes in the first 45.
Forcing saves open saves from the Celtic shot stopper Gordon. It was no surprise, when Rangers took the lead in the 31th minute close range finish from Ryan Jack.  The work rate and the environment created by the Fans correlated. It was actually  Pulsating. Deafening. Electric. Everything you want from an Old Firm clash in the opening half an hour.
Rangers out played the champions and would have easily won the game by aa3 -0 margin by the halfway mark.
The second 45 was just like the first, with Celtic struggling to find pace and Gordon making sure the scoreline continued at 1 – 0. The visitor had their goals ruled out for offside  around the Hour mark but that was the closest they came to scoring.
Goals (1 – 0) And Cards
⚽ 31′ Ryan Jack 1 – 0
🌕45′ Mikael Lustig
🌕76′ Kristoffer Vassbakk…
🌕78′ Scott Brown
🌕88′ Andrew Halliday

Man Of The Match : Scott Arfield

BRENDAN Rodgers On Fan Issues : “My feeling always is that it is better in both grounds whenever both sets of supporters are there.
“However, they are not. There will be about 750 of our supporters there. We hope the whole game can pass safely and there’s no issues around that and it is just the football.“But it can work for and against you as the home team in that situation, when you have predominately the support in the ground. It can add something to the players either a positive or a negative.”

“We just have to approach the game as we always do with our own way of working, respect Rangers are a good team who have had some very good results this year and give them the respect they deserve, as we do every team.
“We will look to focus on our own game, look to play well and get a win.
“We arrive into this game here performing well which is important. The players are confident but we know we always have to work.
“I’ve always been one to focus on my own team. I always respect the opposition but we create our own standard and look at our own game and that’s what’s important.
“At the end of the game we’ll either be in a good position or a really good position, it’s still very early in the season.
“If we get the win we want we will be in a very good position with a game in hand and a number of points clear.
“But still a long way to go. It is only the end of December. We will be thankful for the break when it comes and we can recharge and re-set again and hopefully push on in the second half of the season.
“The records aren’t important. It’s more about how we play and giving the supporters what they want which is to win and win well.”

“I felt as if the first 45 minutes at Celtic Park, we didn’t give a true account of ourselves,” Gerrard added. “We played in a shell and lacked a bit of bravery and belief in the first 45 minutes.“We grew into the game and improved as it went on, but it wasn’t enough. For me, I just hope the players give a good account of themselves [tomorrow].“There will be a lot of opinions about our performance come the end of the game, whether we win, lose or draw. That’s always the case.“This type of fixture gets scrutinised more than any other – we’re aware of that. But I have confidence and belief in my players. I know that if they bring their A game, it should be enough to get the result we want.“I’m sure Celtic fans around the world are demanding Brendan Rodgers gets the win. It’s exactly the same with Rangers fans and me. That’s life in the Old Firm.”